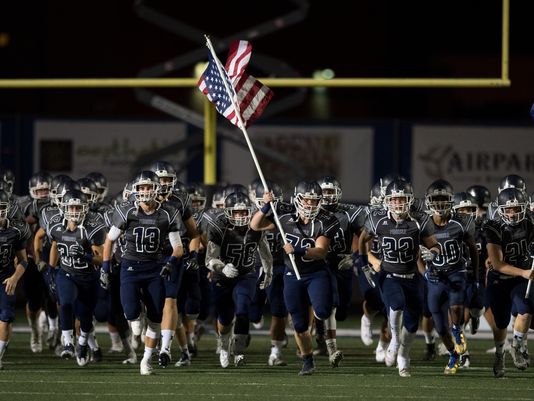 Since I have a passion for high school football in this state I’m going to make this little write up a weekly part of my schedule for the next three months. Too much good stuff to get to from Week One so here we go…

Hunt(er) and Gather…I think somewhat lost in the shuffle of Pinnacle’s close nationally televised win over Basha Friday in north Phoenix was the stellar play of junior running back Hunter Griggs. Ryan Kelley vs. Spencer Rattler more than lived up to the hype but Griggs’ ability to keep the Pioneers balanced with 179 yards rushing and three touchdowns was key. After just two games his 253 yards is nearly halfway to his total in 11 games last year (573).

Love this team and Friday nights !💶🎊🏈

Most impressive part of both quarterbacks performance was their ability to keep their eyes down field and move through their progressions when each were under pressure in the pocket most of the night. Still can’t believe Rattler is barely into his sophomore year. Scary good already.

Flipping the Script…Great little nugget here from my guy Ralph Amsden who always has his finger on the pulse of the prep scene.

Kofa, Horizon and North Canyon all have a chance to move to 3-0 this week. Last year they were 1-29 combined.

Saw a much improved Horizon in Week Zero take out a young, inexperienced Yuma Cibola squad but didn’t see Friday’s 45-20 win at Chaparral on my radar. I understand the Firebirds couldn’t get out of their own way offensively for most of the night (an interception and four fumbles) but let’s give credit to first-year coach Ty Wisdom and his staff for picking up the pieces after a winless 2015. Wisdom, who was named the Arizona Cardinals ‘Coach of the Week,’ should stay perfect taking on Paradise Valley who has allowed 116 points in two games (both lopsided losses). Horizon’s win over Chap was their first in school history.

Rolling Stone…Scottsdale Saguaro is so loaded with talent on both sides of the ball it can be easy to forget about the Sabercats five-foot-nine, 190-pound fire hydrant Stone Matthews who set the tone early gashing the Valor (CO) defense Saturday afternoon in Denver. In two games the senior running back is averaging nearly 120 yards on the ground.

Best wishes to Saguaro’s opponents trying to contain Matthews and junior quarterback Max Massingale who is going for around 100 yards rushing and completing nearly 75% of his throws in two victories over out-of-state schools. The ‘Cats did lose ASU offensive lineman commit Corey Stephens to injury for the next couple weeks. Saguaro hosts Rhett Rodriguez and Tucson Catalina Foothills Friday. It’s back-to-back trips to the Valley for the Falcons who cruised past Tempe 35-7 in Week One.

Expect Big Points In The Big House…if you’re interested in making a little road trip Friday head down to Casa Grande to watch the Cougars host Sunrise Mountain. Boise State commit Chase Cord, coming back from injury, had a handful of touchdowns in the Mustangs 49-0 win at Buckeye.

The Cougs pitch-and-catch combo of Brock Hall and Trevor Russell are impressive and well worth the drive. 19 of Hall’s 36 touchdowns in 2015 went to Hall. They blew past I-10 neighbor Combs 54-6 to open the season.

From PV to NC…Remember Ryan Finley? The former Paradise Valley quarterback is now a redshirt sophomore at North Carolina State after transferring in from Boise State. A grad transfer, Finley is expected to split time behind center with incumbent Jalan McClendon when the Wolf Pack host William & Mary Saturday.

Your Weekly PSA…Remember when you’re out to games this week and every week please make sure to hashtag #FridayNight360AZ in all your tweets. Appreciate your support in helping make it Top Five performer each and every Friday night in Phoenix and the surrounding areas.