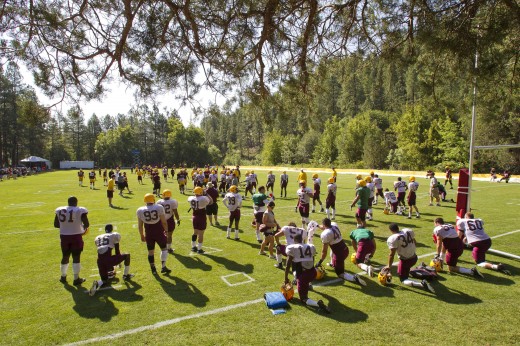 SunDevilSource.com publisher Chris Karpman joined Sports360AZ.com’s Brad Cesmat from Camp Tontozona Thursday with an early report of what has caught his eye from the Sun Devils as they ramp up to their season opener September 3rd against NAU at the new-look Sun Devil Stadium.

First off, with the weather issues the team has experienced up there do you believe the players would prefer staying in Tempe? “I think you will get some of those, especially the veteran guys, who has experienced Camp Tontozona a few times…maybe for them it wears on them after a little bit. The younger guys are more wide-eyed and willing to jump into it and embrace it for what it is. Honestly, overall I think the kids really do kind of like it.”

To you is it clear-cut who the quarterback should be? “Definitely not clear-cut. I think it would be wrong to feel that way seeing what happened in 2012 when Taylor Kelly separated himself the first week at camp that year. [Thursday] we saw Bryce Perkins had changed his throwing mechanics some and I think that’s really starting to benefit him. I thought coming out of spring he was really third and he probably still is…but he worked with Dennis Gile a local quarterback coach. Manny Wilkins is the odds on favorite to be the starting quarterback. He’s the most veteran of the guys. Really good arm. Quick, athletic. But it’s [early] in camp and these guys were too closely compacted, especially between Manny Wilkins and Brady White in the spring to really have a concrete feeling about how that’s going to end up.”

“Player you look at and say, ‘boy I was expecting a little bit more coming into camp?'” “Evan Goodman. Through two days the senior left tackle, the only returning starter, has not had a good start to camp. I just don’t see a sense of urgency. He’s been beaten on pressures to the quarterbacks. They’re not even really in pads yet. That shouldn’t even be the case at this point.

Defensive front seven had its way with ASU’s offensive line today. A lot more QB hurries and sacks than yesterday, led by Wicker.

[Strength and Conditioning Coach] Shawn Griswold did tell me that Evan Goodman changed his whole demeanor, outlook. He was more of a leader in the strength and conditioning program this summer and he felt like he was poised to have a good season but we’re just not really seeing that yet.”

Player who has been better than advertised early in camp? “JoJo Wicker who played as a true freshman last year demonstrated that he’s got a lot of potential. He’s probably lost 15 pounds since last season and he’s been borderline dominant already.

I think he’s going to be in years to come one of the best pass rushers in the Pac-12, if not nationally.”

Which member of the freshman class has caught your eye immediately? “N’keal Harry. N’keal Harry I think is going to be a fantastic football player. He’s gained 11 pounds from 209 to 220 pounds while maintaining the same 10% body fat. Just looks every bit the part that you want. I also like Cohl Cabral. He’s a six-foot-five, 285-pound versatile offensive lineman who bends and moves well. He could play center all the way out to tackle. They’re looking at him as a long snapping option. I think he’s been really impressive.”