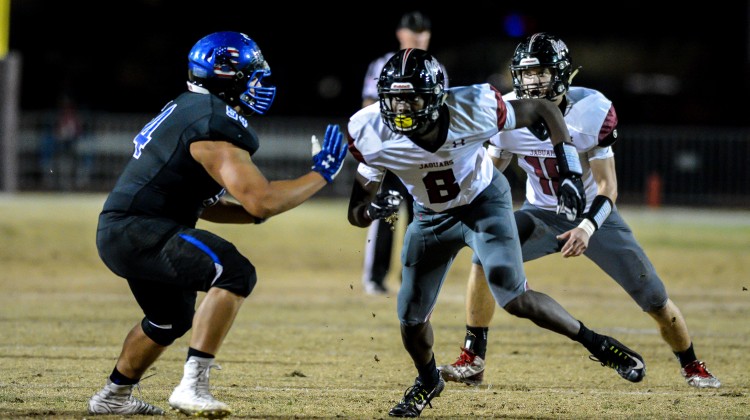 The Arizona Wildcats received some big news on the week of starting their 2016 fall camp as one of the top Arizona prospects for the 2017 class has committed to them. Jalen Harris, the 6-5, 205 pound defensive end and wide receiver announced on friday that he will continue playing football at the next level for Coach Rich Rodriguez.

Harris is coming off of a breakout season for the Jaguars as a two-way player with 70 tackles and 5.5 for loss with 17.5 sacks at defensive end while hauling in 50 catches for just under 800 yards and five touchdowns in his junior season according to MaxPreps. He has added about 15 pounds since then looks to be a forces going into his senior year.

“I just got a good feeling from when I was around them,” Harris told Sports360AZ. “They showed interest in me and I felt I built the best relationship with them.”

Jalen is a legacy at Arizona as his father Sean Harris was a standout for the Desert Swarm Wildcat defense in the early 90s and went on to play line backer for the Chicago Bears at the next level. He was a two-time first-team All-Pac-10 player in 1993 and 1994 and earned first-team All-America honors by the Scripps Howard news service in 1993. He is still in the top 10 on UA’s career records with 248 unassisted tackles.

“It means a lot,” Harris mentioned. “My dad had success and I’m hoping I can too. I know it won’t be given to me though I will have to outwork people from the start.”

Jalen, is very long and fast around the edge and great at getting to the quarterback which is undoubtedly what the Wildcats like most about him. He chose the Wildcats who were one of 15 schools to offer him which included ASU, Colorado, Illinios, Iowa State, Oregon, Oregon State, Vanderbilt and Washington State to name a few.

“They (Arizona) are showing more interest in the kids now and I think to win you need to be able to get the best in your state,” stated Harris.

Harris is now the fourth prospect from the state of Arizona joining Bryce Gilbert from Higley, Drew Dixon from Sabino and Rhett Rodriguez from Catalina Foothills to committed to the Wildcats and their 24th player committed for the 2017 class.

“The first [thing] you notice about him is his calmness. He’s very calm in big moments. We built an offense around him and he knows it. He’s excited about that. All of a sudden, he’s become the face of the team." @HermEdwards on sophomore QB @JayD__5. #ASU #SunDevils #Pac12FB https://t.co/mS0ckUfmhd
View on Twitter