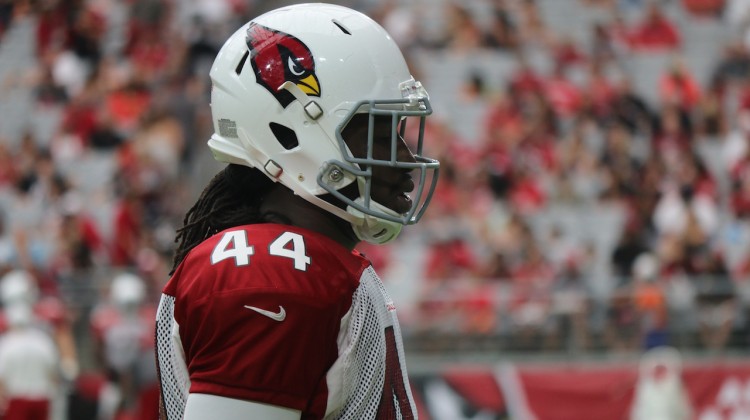 That is the name of the game for Arizona Cardinals linebacker Markus Golden. In his senior year as a Missouri Tiger, he notched 77 tackles, 19.5 tackles for loss and eight sacks. Though, standing at 6-foot-2 and 260 pounds, he was considered too small to be an elite prospect and was overshadowed by his Tiger teammates Michael Sam and Shane Ray.

That didn’t stop the Arizona Cardinals from selecting him in the second round of the 2015 draft. Steve Keim and Bruce Arians admitted they watched Missouri’s tape often to scout Ray, but number 33, Golden, kept jumping off the tape. When the pick was made, the NFL Network’s Mike Mayock said, “This is one of the hardest-working men in football.”

In Golden’s rookie season, that quiet production continued, making 31 tackles and four sacks with the Cardinals. Golden was another name on a talented defense, and he is just fine with that.

“We have a good team defense,” Golden said. “Everyone knows the players around the whole defense and everyone is making plays. We (now) have Chandler Jones, Nkdemdiche, Frostee if he can get back soon. We have a lot of great playmakers on this team”

Golden comes into his second season with his feet under him, ready to continue his production.

“I’m playing with confidence, knowing what I can do now. When you know that, you can go out there and be yourself so I am able to use the moves I use to get to the quarterback or have to set my edge or drop and cover the ball,” Golden said. “I’m getting a lot more comfortable with the scheme and knowing what I have to do every play.”

Veterans like Dwight Freeney and Lamarr Woodley, as well as linebackers coach Bob Sanders took Golden under their collective wing to get the rookie up to speed last year, but ultimately the growth came from within.

“I put it up on myself. When you want to do something, you have to take it upon yourself and go hard,” Golden said. “I just really got into the playbook myself and found different ways to make things a little more simple for me, and it’s been helping me ever since then.”

So now, Golden is navigating his second NFL season, growing and working so he can take the leap from rookie contributor to defensive stopper, joining a list that already has Peterson, Mathieu, Bucannon, Jones and Campbell.

If Golden continues his progression, his quiet production will ring so loud the national audience will have to listen.