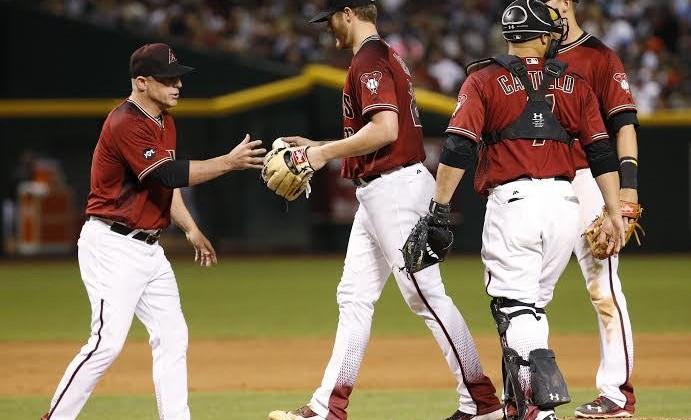 Arizona Diamondbacks manager Chip Hale pulls Shelby Miller from the game against the New York Yankees in the 6th inning in Phoenix, Ariz., on Wednesday, May 18, 2016.

If there were “do overs” in professional sports the D-backs would have likely cashed in their 2016 card quite some time ago. Key injuries, underproduction, over-analysis and at times simply bad luck has left the remaining summer nothing more than essentially extended spring training over the next two-plus months.

The D-backs stumbles haven’t come as a complete surprise to others around the game who believe the dis-function on the field in some ways starts at the top according to one baseball insider.

“This is an organization that has certainly raised eyebrows around Major League Baseball for years,” ESPN’s Pedro Gomez told Sports360AZ.com’s Brad Cesmat in a recent phone interview. “It’s one that when I talk to rival people in front offices they always are like, ‘what exactly are the Diamondbacks doing? What is their master plan?'”

Gomez cites the Kansas City Royals as a team which developed an internal plan to rebuild and stuck with their young, high draft picks despite some rocky seasons where wins were difficult to come by. However, the end result was back-to-back World Series appearances and a championship last fall.

Arizona has parted with Dansby Swanson, Trevor Bauer, and dating back a bit Max Scherzer who has gone on to be one of the top aces in baseball. Maybe it’s best if Arizona takes a page from the Royals blueprint.

“They drafted very high a number of years because they were so horrible,” Gomez said of the Royals. “But they were able to get guys like Alex Gordon, Mike Moustakas, Eric Hosmer, Luke Hochevar…all were high draft picks. But they didn’t turn around and trade those guys away.

Unfortunately, the Diamondbacks are learning that firsthand.