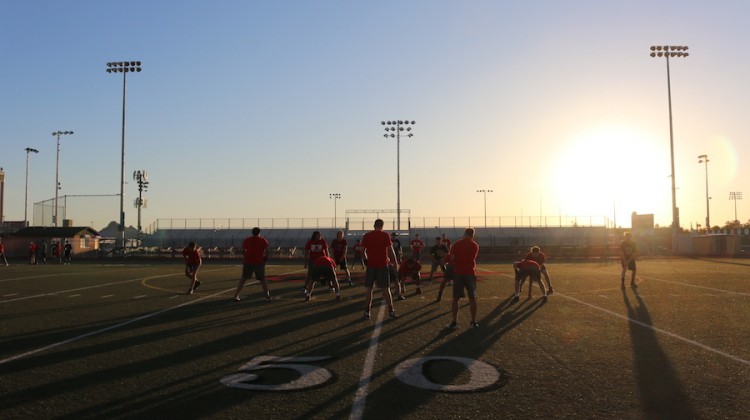 I love this state, but Arizona summers can be insufferable. With the high school football season quickly approaching, teams are trying to prep and come together when the Friday night lights turn on. Whether they took to the beach or the mountains, some of the top programs in the state are getting out of the desert heat before the season kicks off.

Jason Mohns has built a machine that just doesn’t stop over at Saguaro. Obviously, the cogs in that machine are hard work on the field, getting stronger in the weight room and proper nutrition. But a top program needs plenty of rest, and the ‘Cats didn’t skimp on that on their way to California…and the coaching staff made sure to document it.

Coach Mohns also took to the beach in a little downtime, and cited Jamie Kennedy’s finest work in the process.

Desert Vista was one of the best turnaround stories last year. The Thunder took to Show Low and experienced literal thunder (and rain, and lightning) during their camp.

It's a little wet in Show Low, monitor and adjust our afternoon practice. Kids are all doing great! pic.twitter.com/ZMwekI3jgu

One of the key goals every team has each offseason is keeping players healthy. Unfortunately, entire seasons can be derailed when players are still in basketball shorts. While I’m sure Coach Hinds has taken every precaution to keep his player’s healthy, he may want to take that same approach for his coaches…

Like Saguaro, back-to-back state champion Centennial has the formula for gridiron success. Year after year, Richard Taylor is able to reload and have one of the top programs in the state. The Coyotes headed west to California for their camp this summer, looking to go for the three-peat.

CENTENNIAL FOOTBALL at the top of the mountain! CA camp 2016 pic.twitter.com/FCmLdhz3Of

Steve Decker starts his first season as head coach of Sunrise Mountain in August. He has a deep, experienced group led by quarterback and Boise State commit Chase Cord. The Mustangs are working hard to make a run in 2016, so they are soaking up the good weather before the season rolls around.

The Mesa Jackrabbits are coming off an 8-4 season and have a young quarterback and backfield to build around. Former Arizona Cardinal Deuce Lutui is a part of the coaching staff and has been streaming portions of the camp on Facebook Live.

You can beat the heat by heading up north or getting up early. Apparently, the Jackrabbits are doing both. In the video below, Mesa gets some conditioning in before 5 a.m..

Is your high school team traveling for summer camp? Are there interesting (or embarrassing) team-building exercises? Share the tweet with @JordyHamm or send it via email to [email protected]