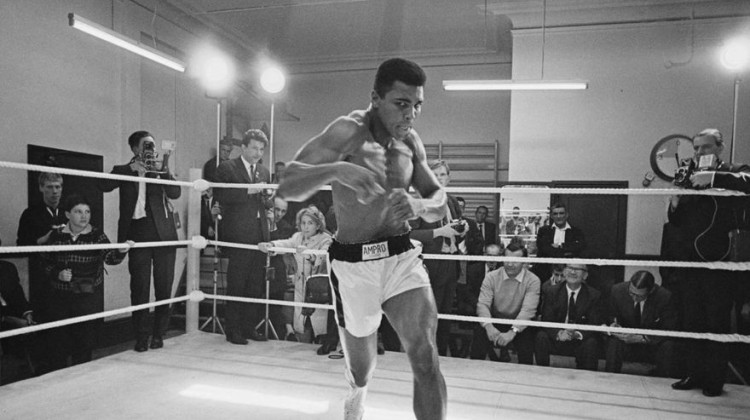 The Greatest is gone.

I sat there, like many of you, shocked when I heard the news Muhammad Ali had taken a turn and passed Friday night.

Social media flooded with pictures, quotes and stories of The Champ. People shared instances of his drive, charm and larger than life presence if they had the good fortune of meeting him.

I wasn’t able to see his fighting career, and by the time I got to the age where I could grasp the idea of who Ali was, he had been dealing with Parkinson’s disease for over a decade. He wasn’t the presence who could punch as quickly as he could talk, could impose fear into just about anybody while possessing a gravitational pull to attract everyone’s attention to him when he walked in a room.

Growing up, I had been to a handful of games and concerts where Ali was honored, but never had too many close encounters. The only time I was close to that kind of greatness was in 2009. As a freshman in college, I was covering a charity home run derby put on by then ASU head baseball coach Pat Murphy.

I’m a huge college baseball fan, so getting to see these types of players up close was incredible, but the highlight of the night was an appearance by Ali, who was supposed to shake some hands and take a photo with some little leaguers. Ali and his wife made their way to home plate on a golf cart, and there wasn’t a sound on that field. Everyone was mesmerized by him. One man was so mesmerized, he couldn’t pass up the chance to grab an autograph.

He rushed the golf cart, reached over Ali’s wife and shoved something to Ali for him to sign. Plenty of people took objection to this including Mrs. Ali for the man’s aggressive nature. The crowd became restless due to this guy, but they were silenced when Ali grabbed on to the autograph seeker’s arm.

No one moved a muscle.

What could have been a chaotic scene turned into a peaceful one.  Ali took the pen, signed the paper and didn’t break eye contact with the man.

The autograph seeker went on his way after remarks from the crowd. Ali got out of the cart, and his face lit up when saw the little leaguers waiting for him. He spent time taking pictures with them and gave Pat Murphy a hug.

I never got to see the cultural revolution that was Muhammad Ali.

I didn’t hear his sharp wit or see just how elusive he really was. But I feel like I saw everything that made Ali great – his power, his ability to demand a crowd, his heart, his protective side, his ability to not let a situation get away from him, his forgiveness, his peacefulness and his charm – all in a span of a minute or two.

He may not have been light on his feet or able to pick apart his opponent with punches and words, but he was great that night.

Man, was he great.