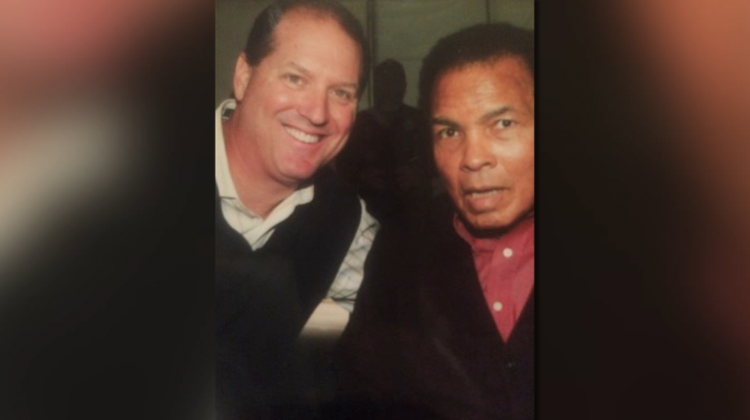 When I first came to Phoenix in December of 1993, I met Muhammad Ali. It was at a Suns game. A man by the name of Jimmy Walker introduced me to “Champ”.  It would be the first of many times that I would be in the presence of Ali. All of my interaction was set up through Walker, who was the creator of the star-studded Muhammad Ali Fight-Night event. Jimmy would call and ask me to MC a sponsor lunch at the Ritz-Carlton with “Champ”. One year Jason Kidd and I tried to help Ali up onto the stage of the luncheon and he slapped away my helping hand and wagged his finger slowly in my face as if to say “no”, slowly he made it up the steps and onto the stage in front of about fifty VIPs. He looked over the crowd and took out of a deck of cards and did a magic trick. He didn’t say a word because Parkinson’s had already started to take away his ability to speak. There weren’t many dry eyes in the room at that moment, including mine.

Fight Night grew and grew into this mega world-wide spectacle. “Champ” would be there, sometimes looking bright-eyed, sometimes not.
Jimmy would ask me if I wanted a picture with Muhammad and I would decline. He’d done enough photos at the event. I didn’t need to add to his time.

For the last twenty years, I’ve been the MC of Jimmys “Bicycle for Kids’ event. “Champ”
would show up some years. We’d hide him in a tent filled with bicycles and bibles for at-

risk kids. We’d line the kids up and countdown from 2o with the kids eyes closed. Once we go to one, I’d yell out “Merry Christmas” and the kids would open their eyes and there would be “Champ” sitting in front of the bicycles. The kids would rush to the bikes, the parents and guardians would rush to “The Champ”. It was truly an amazing sight.

Muhammad showed up at the Diamondbacks locker room one time. Jimmy asked me to come in and watch Ali interact with the team. Quite a site. The players were scared to ask for a picture, but once one of them did, the rest followed. Coaches too.

We sat together at that Diamondbacks game and “Champ” put his arm on my shoulder. I leaned into him and said something about Jimmy. Champ took his finger and made a circular motion around his ear, like “Jimmy’s crazy” the two of them then embraced  Very few times have I been in awe of a moment as I was that night sitting next to Muhammad Ali at a baseball game for four innings.

I am sure my stories aren’t much compared to others, but they are MY stories with “The Greatest”. I am saddened to hear about “Champ” passing away.