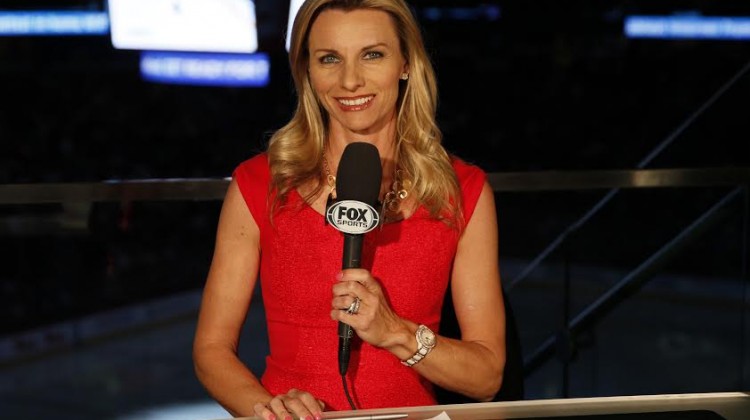 From an early age Jody Jackson knew she wanted to play a role in the world of sports, whether that be with print or television. Little did she know her bright future would shine right here in the Valley of the Sun. You’ll see her reporting live at Chase Field with FOX Sports, at Coyotes games and on the sidelines with the Cardinals.

“When I was a kid I used to pretend I was on the news,” Jackson told Sports360AZ.com in a recent sit down interview. “Back then there weren’t many women in sports so I didn’t automatically think I would do sports. It’s funny because I wasn’t very outgoing as a kid. I was kind of shy.”

Jackson went to the University of Miami where she double majored in journalism and political science. After college she got a job in sports radio. It was there she realized her childhood dream had become a reality.

“I got to cover different teams,” says Jackson.

As a young 21–year-old, she traveled alongside the Miami Dolphins. An exciting moment for her was when she interviewed former Dolphins quarterback Dan Marino whom she watched growing up.

Her flexibilty and work ethic led her to more opportunities and more time practicing in front of a camera. Broadcasters Frank Forte and Steve Shapiro helped Jackson make a TV tape, which landed her a sportscaster position in Buffalo, New York.

After working in Buffalo for one year an agent helped her find her way to Phoenix.

The rest is history.

Since 2000, Jackson’s been working with FOX Sports, becoming one of the most well-respected in the broadcast community.

We asked her what makes her so well respected.

“Working hard is number one,” says Jackson. “For me, I take my job very seriously. Now that I’ve been doing this for a number of years I know how to do the job and how to prepare. That’s my formula for success.”

“JJ” says it’s important to always be aware of what’s going on around you. Listen to people, let them talk, and then tell the story.

Another aspect of professionalism is being sensitive.

“Put yourself in the player’s and manager’s shoes,” she explained. “It helps to identify with the emotion of that moment, or what they might’ve been trying to do in the game.”

In the beginning, Jackson says, “I didn’t know what all it took, especially with baseball. The key is to really watch the game, taking notice of the details of the game.”

Being one of the few women in this profession is motivational.

“In 1997 when I covered the Marlins there were some players who I could tell wondered what I was doing here,” Jackson said. “But that’s why I always try to prove that I care about sports. I think it is important to know what you’re talking about whether you are male or female. If you want this job you have to do homework. People expect you to know what you’re talking about so it’s important for me to do my job well.”

Though the job is not always glamorous, in fact it’s rather time-consuming for the mother of two young kids.

The Diamondbacks have 11 road trips this year; Jackson will go on six of them. How does she balance being a mom with her crazy work schedule? She tries to balance work life with mom life by planning things in advance. Whether that’s planning ahead of time what her kids and husband will eat for dinner that night or working on a Father’s Day gift in advance.  It’s all about priorities.

Commenting on Zack Greinke’s last shutout, making it to her daughter’s dance recital and cheering on her son at his little league games, might make one wonder, is there ever a dull moment in the life of Jody Jackson?

“Life is all you’re conditioned to,” she says. “This can apply to so many of us. It’s hard at times but overall it’s rewarding.”

One of her favorite memories was interviewing Luis Gonzales after the D-backs won the World Series in 2001. Another standout moment for Jackson was when Fitzgerald dashed to the end zone in the final minutes at Super Bowl XLIII.

“Even though we lost the game, being in the tunnel, waiting to see if we would be going out onto the field was so exciting,” she said.

If you wonder where the Queen of Arizona Sports goes to get her news, she reads the sports section in The Arizona Republic and Twitter.

“I try to not be on Twitter constantly but it’s hard sometimes. I like the ‘while you were away’ thing on Twitter, it seems to put the stuff I care about right there,” she says.

First one to arrive at the ballpark and last to go home, Jackson is a hard-working individual who empowers not only women, but also anyone who’s looking to gain respect and success in sports journalism.