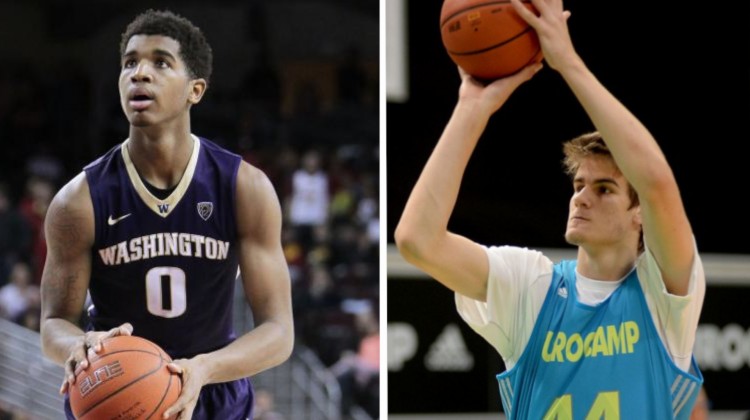 The Suns will select fourth overall on Thursday and when looking at the make-up of the roster as it presently stands, one would have to believe that they will look into selecting someone they could plug into the power forward spot long-term.

It could be a highly scrutinized move because a power forward might not be the “best available” at the time the Suns select and like Cardinals head coach Bruce Arians once said, drafting for needs “will get you broke and fired.” But one thing is for certain, the Suns have plenty of guards and drafting Kris Dunn out of Providence or Jamal Murray out of Kentucky would make things that much more complicated.

If the Suns look to take a four with the fourth overall pick, the two most likely candidates are Dragan Bender from Croatia and Marquese Chriss from the University of Washington. Both of which are being considered tow of the biggest mysteries of lottery projected players.

Chriss is a 6-10, 233 pound forward who was born in 1997. Yes, 1997! When watching him during Pac-12 play, at times he looked every bit the projected lottery pick and other times, looked every bit his 18 years of age. The word I constantly heard when describing him which is absolutely true is “bouncy.” He set a freshman record for blocked shots in a season last year for Washington and had plenty of highlight reel dunks. He can get out and run in the open court which would be great for the Suns style of play and has the ability to shoot from the outside.

You put all of these factors together and you cant help but think Amare Stoudemire which would obviously make Suns fans ecstatic. Amare came in a raw but athletic power forward with a high motor and a jump shot that improved with each passing year. Coming out of high school in Florida however, Amare was a year younger and ten pounds heavier when the Suns drafted him than what Chriss is now.

What does worry me however was when he announced he was going to be leaving Washington after one season, many were somewhat surprised. I think many believed he could benefit from having another year in college like Ivan Raab at Cal chose to do. It went from that notion to people debating whether he could be a better long term prospect than Brandon Ingram. I am not so sure about that.

Here is an odd stat about Chriss. He fouled out in half the games he played in at Washington last season. Also, his turnovers were alarmingly high. According to basketball-reference.com, Chriss had the turnover percentage of 14.7 which is an estimate of turnovers per 100 possessions. Very high for a big man. You add in his 24.1 percent usage rate which is an estimate of the percentage of team plays used by a player when on the floor. Those numbers were just slightly below Husky teammate Dejounte Murray who was their point guard and one of the primary ball handlers.

The Fouls and turnovers tell me his maturity as a basketball player has a long way to go and are the Suns willing to wait?

Bender is a 7-0, 225 pound power forward who was also born in 1997. It is so bizarre to me thinking that we are just a few years away from there being professional prospects who were born in the 2000s. That’s neither here-nor-there. Bender when watching his youtube videos looks like a player anyone would be thrilled but you have to take into consideration the level of competition. He is the modern day power forward with his ability to stretch the floor. Dirk Nowitzki got it started being an all-star level “stretch four” who is a threat both inside and out. Bender has drown Pau Gasol comparisons as well.

Bender’s ability to shoot from beyond the arc (shot 38.6 percent from 3-point range in Israel last year) is what gets NBA GM’s excited. It is said that his basketball playing days started with him playing point guard before growing into the big man he is which makes him much more skilled with shooting, passing and footwork then your typical big. That’s a huge plus. When you look at the production Mirza Teletovic had in that spot for the Suns under Earl Watson last year, imagine plugging in a young and up-and-coming prospect with higher upside than Tele in that same spot instead. Makes you feel a little bitter about the direction of your team.

While Bender is the blueprint of what a successful power forward looks like in todays game, numbers at the end of the day don’t lie. Especially to the Ryan McDonough’s of the world. In the Israeli Winners League last season, he played in 26 games averaging 13.7 minutes, just 5.4 points and 2.7 rebounds. In seven games playing in the Euro League, he averaged 10.5 minutes, 2.1 points and 1.4 rebounds. Those numbers are very underwhelming but obviously you are not drafting Bender for who he is now if you are the Suns. What he is now is an incredible combination of size and skill that needs to go a long way in terms of strength and durability.

While the two both seem to be long term projects there is a glaring difference between the two. It’s drafting for upside with athleticism or drafting for upside with skill. Chriss has the tools to be an explosive and exciting player in this league while Bender has the tools to be an unique player who could provide matchup issues and skills that provide that “it factor.”

So if you are drafting a four at four, which would you choose?