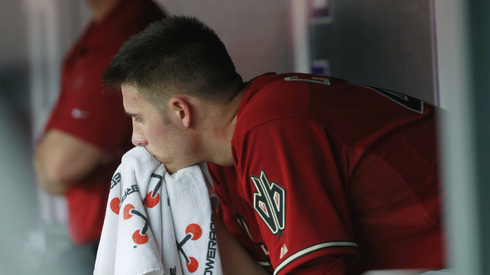 Arizona Diamondbacks starting pitcher Patrick Corbin sits in dugout after being pulled from the mound in the fourth inning against the Colorado Rockies in a baseball game in Denver on Sunday, Sept. 22, 2013. (AP Photo/David Zalubowski)

The week couldn’t have started any better for the Arizona Diamondbacks or struggling starting pitcher Shelby Miller.

Not only did the D-backs finish a four-game sweep of the Phillies in Philadelphia Monday, Miller (2-6) sparkled in his return to the mound allowing just a single run while striking out five and walking one in 6.2 innings.

If only things could always be this simple.

Outside of resurgent ace Zack Greinke the starters have been erratic at best. There has been issues with how the starters are used and when they are being left in too long or taken out too early. The dynamic has been a tough one for manager Chip Hale to solve.

General manager Dave Stewart, a three-time World Series Championship pitcher who won close to 170 career games, believes it’s time for the staff to take ownership and a sink-or-swim-approach according to at least one baseball insider.

“I think that’s he’s gotten to the point where, ok he’s played nice for the first four months or so,” ESPN’s Pedro Gomez told Sports360AZ.com’s Brad Cesmat in a recent phone interview. “But now it’s time. ‘Hey, you’re complaining then you finish the game.’ [The front office] probably talked to Chip Hale and said, ‘these guys think they can do better? Leave them in the there. Let’s see what they can do.'”

Gomez compares Stewart’s situation to Nolan Ryan’s when he was the Chief Executive Officer for the Texas Rangers. The Hall-of-Famer essentially “toughened up” the Rangers staff imploring them to extend their stamina and pitch count well past 100.

“You’re going to go deeper in the game,” Gomez explained to Cesmat. “Maybe into the eighth inning, maybe into the ninth inning. Shortly after he got there the Rangers made two World Series appearances.”

Gomez says although the “standard” pitch count is around 100, most pitchers believe they can throw close to 120 per start on normal rest before fatigue and potential risk of injury increases.

That theory will certainly be tested if Arizona wants to stay close in the wildcard race this summer.

It’s always an arm’s race, especially in the National League.