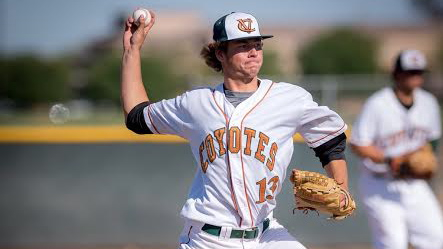 School officials and coaches must adjust to the new pitch count rule heading into the offseason with the enforcement of the rule approaching in the summer.

The Arizona Interscholastic Association Legislative council passed a new rule that puts limits on the amount throws a pitcher can deliver in a game before having to be relieved in accordance to age group as suggested by Major League Baseball guidelines in early March.

The AIA legislative council approved the amendment with a 37-1 vote to enforce strict pitch count limits and for pitchers at the high school level.

Lauren Krasner reflected on one of the toughest parts of her career as an Athletic trainer is when she has to inform athletes that their athletic career is over as is their pursuit of a professional career in their particular sport.

“It’s difficult, when I have to tell them (baseball players) their injury is season ending if not career ending,” Krasner said. “Placing too many pitches on it (throwing arm) and too many different types of pitches on it can set you up for failure and some major injury.”

Krasner has seen her fair share of injuries throughout her career but she believes the most preventable injuries are of pitchers whose arms are overused when coaches ask them to pitch more and rest less which puts the athletic careers of kids in jeopardy.

Potential relief is coming for pitchers who play for their respective high school teams in the means of limited pitch counts and increased time between rest days.

This comes at a time when concerns are growing and being voiced by the media about the health of high school athletes who play football and baseball.

According to the legislative council the issue of preserving the arms of the youth is very much a safety concern like that of preventing concussions in football just different body parts.

Concussions are the main concern in football while in baseball an increasing trend of major injuries to pitchers has caught the attention of legislators.

“This met some concerns from legislators that want some changes,” Steve Hogan of the Mesa District said. “I don’t think this is a cure all, fix all but hopefully it might help down the road.”

The current active rule in place this season limits only the amount of consecutive innings a pitcher can throw will be replaced by the count of pitches by age beginning in the high school offseason starting on July 2016.

According to AIA Executive Director Harold Slemmer, the specifics of the active rule states that no pitcher should throw for more than 12 innings or 36 outs in a consecutive 36-hour period without two consecutive calendar days of rest.

The hope is for the new pitch count rule to be enforced next season is to limit the amount of serious injuries cause by overuse to pitchers who play on sore arms without the appropriate amount rest days required to recover.

Slemmer emphasized that the focus of this new pitch limit rule is to protect the health of the players rather than win games or even championships.

“The health and safety of all kids in any sport trumps in convenience,” Slemmer said. “With the research we have on pitch counts and what we already know about it, I felt should be implemented as soon as possible.”

The statement came after the proposal to make the rule official on emergency legislation failed to pass the vote with a 21-17 difference keeping the new rule on deck for the 2017 spring baseball season.

The amount of injuries softball and baseball players suffered was of low incidence though a baseball season. However most injuries were minor and occurred in the upper extremity but he highest injury rates were highest during the first month of the season. The most oft-injured body parts were noted to be the forearms, wrists and hands for both baseball and softball

The study revealed that athletes might benefit from a more gradual increase in activity and a structured off-season injury prevention program.

Although the findings of the study suggest that most injuries that plague baseball players are minimal, it highlights the need to monitor players and coaches who may persuade a pitcher to play beyond what they should in order to win or a player from pushing their arms to the edge of the catastrophic Ulnar collateral ligament injury that is known for requiring “Tommy John” Surgery.

The fact the pitchers are having serious injuries at a young age implies that the element of athletes arms being overused is present in youth baseball leagues to the point of injury is alarming as it is a preventable injury and one that should not occur in the high school level of competitions.

Mesquite High School Athletic Director Jason Grantham expressed his approval of the new pitch count rule but also uttered that high school baseball may not be the problem.

“The one thing I caution on is that I don’t know if this is necessarily a high school problem,” Grantham said. “I think its club baseball that becomes year round. When they get to high school level, they (pitchers) have had a lot more strain on their arms, nowadays then in years past because of the year-round baseball, travel baseball, club baseball and all of those things parents feel are necessary for their kids.”

Mesquite Varsity Baseball coach Jeffrey Holland also voiced his praise over the intent of the new rule of protecting the player’s arms on the long run but also to give those talented players an opportunity to play at the collegiate level instead of setting them up for failure.

“You (pitchers) are playing baseball 345 days out of the year, I mean they need time to rest and time to just be kids,” Holland said.

Holland also expressed his concern over the effect the rule may have on the smaller schools with much less players to choose from along with the stigma that could come with shorter pitching performances by the players.

“Some kids are afraid to tell their coach that their arm is sore, they don’t want to be called names or teammates getting on them,” Holland said.

The effect year round baseball teams along with travel baseball teams are having on high school baseball could lead parents to be more precautious about the health of their kids much like parents of football players who have begun allow their kids to start playing the sport at a much older age than in the past. .

Kyle McCormick, Junior, Varsity pitcher at Mesquite High School has experienced minor injuries his pitching arm and agrees that the new pitch count rule will help the longevity of the player’s health through their high school athletic careers and beyond.

“I have had a stress fracture in my elbow and I was out three to four months,” McCormick said. “The most pitches I have thrown is 115 and you could definitely feel it the next day. It affects you going into your next start and it takes you longer to recover.”