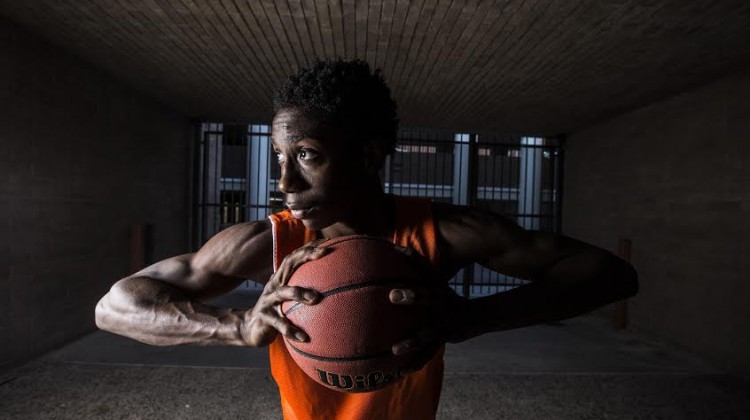 Appropriately, Saben Lee wears a t-shirt which reads, “Basketball Never Stops.” After getting to know him it’s clear this is a mantra he lives by, though in his spare time he might try to fit in a game or two of Super Smash Bros.

The six-foot one, 172-pound basketball player is a rising star at Corona del Sol. Keep your eyes on this emerging talent as he racks up numerous Division I offers and prepares for his senior year.

A few of his offers include Boise State, Stanford, Utah, Nebraska, Weber State, Pacific, Pepperdine, Northern Arizona, Grand Canyon, and Northern Colorado. Lee has not received offers but is talking with Arizona State and University of Arizona, as well as Gonzaga, Vanderbilt, Arkansas and others.

Lee told Sports360AZ.com he plans to visit some schools this summer but has not picked any official dates yet.

This has been quite the year for Lee. In addition to his success on the court he has managed an impressive 3.8-weighted GPA. He not only has talent and brains but also, anyone can tell by having a short conversation with him he is truly a humble yet focused individual.

“It’s exciting that I have picked up offers from various schools,” Lee told Sports360AZ.com. But he knows putting hard work in at the gym and, “…not let all the hype get to my head and stay focused on my goals,” are what’s really important right now.

“My dad and club coach John Ortega has been a huge help in this recruiting process,” Lee told Sports360AZ. “My dad he’s been with me from when I was little. He has always set a goal for me and he’s always made sure that I work to my full potential … I probably go to Lifetime (Fitness Gym) with him five times a week. We always get a lot of shots up and I feel like very recently we’ve been picking up the amount of reps so that has helped me with my play.”

John Ortega, a coach for Power Academy, has played a major role in Lee’s career.

“He gives me the green light and has been behind me all the way,” Lee said.

In addition to time spent in the gym, Lee works with Seth Harris a physical trainer at Underground Fitness. “He has definitely helped my athleticism a lot,” Lee said.

As the summer approaches his plans include the Ryan Silver’s Elite 100 basketball camp and possibly the Under Armor All American camp.