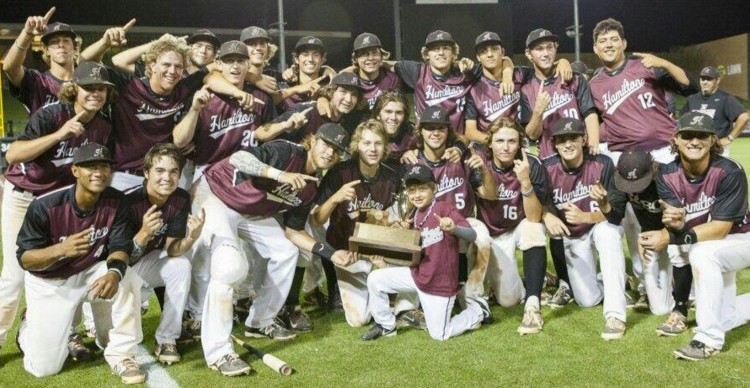 The thunder of the Hamilton high school bats won out over the lighting in the sky.

Junior outfielder, Brayden Merritt said his highlight of the game was, “When they [Mountain Ridge] were giving our third baseman a lot of c%$p and he hits a double that clears the bases. I was happy for him.” Shortstop, Drew Swift added, “That was big for us and it got all the momentum going.”

On the mound junior Cole Bellinger came up big for the Huskies, pitching out of a bases loaded jam in the fourth inning. Bellinger would throw seven innings and allowed just one earned run.

Hamilton head coach, Mike Woods told Sports360AZ.com, “The highlight of the game, the big hit, I think was Chris Collins’ (hit) he got with the bases loaded that kind of broke things open. But just watching the kids celebrate and enjoying that’s the highlight for me.”

With the victory, Hamilton has now won five state championships on the diamond.

Celebrating a state title was all the roar well into the night – studying for finals was clearly not on the minds of the Hamilton students.

It’s definitely going to be a late night for these boys as sophomore, Britt Graham said, “Uh yeah, I’m going to study all night. It’s going to be crazy.”

Surely this is will be a night the Huskies will always remember.