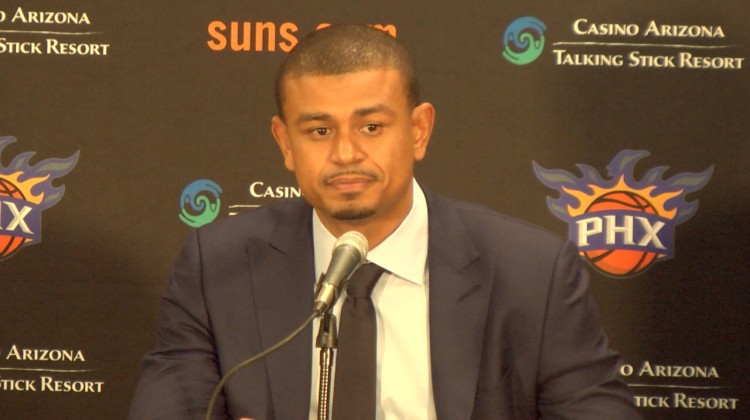 The book on Earl Watson that’s been out since his promotion to interim head coach in February has been that he’s a great mentor; a teacher and a motivator of the highest caliber.

It’s the same story that was told about him as a veteran player for many years, mentoring young future stars at every stop in his 13-year journeyman career. We know this about Watson: Players respond to him. It’s part of what reportedly drove many players into the Suns front offices to speak up for Watson as the guy they thought should be the permanent head coach of the team.

But motivating and teaching is only part of coaching. The question – and it’s a reasonable one after winning just nine games as interim head coach – is, can he run a team on the floor?

Ryan McDonough has seen enough to believe he can.

“I think one of the things that impressed me as I reflect back over the two and a half months after he took over is a series of plays late in a game against Minnesota at home where we won a close game,” McDonough said, referring to a March 14 victory over the Timberwolves.

“There were three distinct late-game situations that I remember that were dead-ball situations or coming out of timeouts, where Earl drew up three different plays,” McDonough said. “And I think two of them worked. The other one probably would’ve worked if Devin (Booker) hadn’t dropped the ball out of bounds.”

In a season where every win was precious, those moments stood out to McDonough.

“That was pretty impressive, for somebody who’d never been in that position before, as a head coach, in a close game at the NBA level to come up with three sets that got our players the best looks at the basket, that’s not easy to do,” McDonough said. “Right away, that made a great impression on us that he has creativity and the ability to, under pressure, clearly communicate what he wanted our players to do and execute down the stretch.”