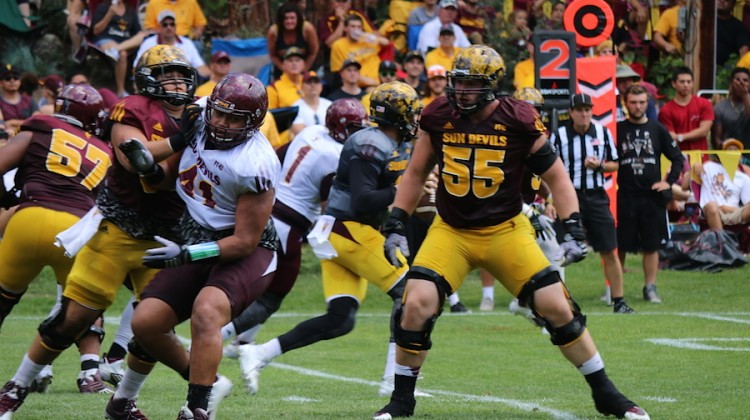 There are plenty of draft hopefuls from both Arizona and Arizona State this season, and Pro Football Focus senior analyst Steve Palazzolo provides insight on some in-state prospects:

Sports360AZ: Devin Lucien came on strong at the end of the year, and your site has some very complimentary things to say about his catching abilities. What round do you think Lucien will hear his name called and what type of pro will he be?

Palazzolo: We see Lucien as a third round prospect, but not sure if the NFL is as high on him at this point. He’s sure-handed and did a nice job making difficult catches at ASU. We see him possibly growing into a number two role, but he at least adds a solid dimension to a passing game that can win contested catches.

Top sleepers in the draft:https://t.co/WngfBYQlr3

Sports360AZ: It’s well documented that Christian Westerman is a “freak” athlete. What numbers jump out at you when analyzing the ASU guard?

Palazzolo: He’s one of the best pass protecting guards in the class, love his movement skills. He had one of the top pass blocking grades and has only given up 27 pressures over the last two years.

Sports360AZ: Will Parks was a bright spot on the Arizona defense last year. What sort of NFL system would play to his strengths?

Palazzolo: Parks has posted two outstanding grades for us playing in his hybrid slot/safety role and while he may not be suited to cover shifty NFL slot receivers, he really sees the game well and we think he should get a look as a free safety. He’s a smart player that can move around the defense, play some center field and even match up with tight ends if necessary.

A name to keep an eye on in the middle rounds is Arizona's Will Parks. Played the slot/safety hybrid, intriguing safety prospect. Smart

The draft kicks off on Thursday at 5 p.m. and continues through Saturday.