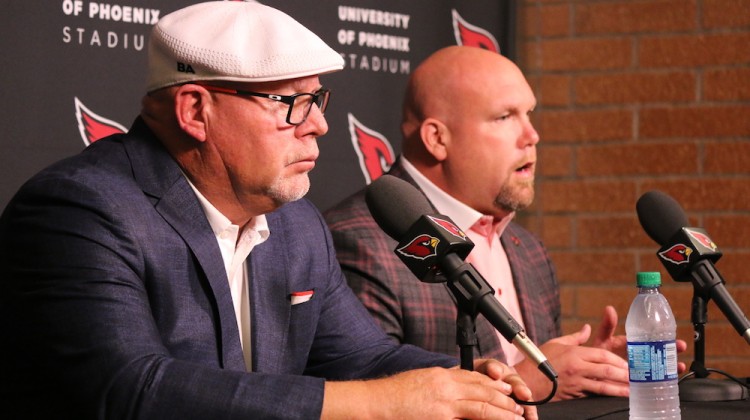 The NFL draft is a strange beast.

There are the months of prodding, evaluating, doubting, interviewing and to get right a draft board right where it needs to be.

The gut reactions when a name is called, good or bad, is instantaneous, and let’s be honest, we have no freaking clue.

There are surer things when evaluateing talent, but tracking down and utilizing talent is far from a sure thing.

Sometimes the player is surprised by where he is picked because even HE wasn’t expecting it.

The Texas A&M cornerback was watching the draft in the Aggie locker room for two reasons: 1) He doesn’t have cable at his apartment and 2) He wasn’t anticipating getting taken this early.

The Texas A&M cornerback didn’t start at Texas A&M or the position where he currently resides. Williams was an Oklahoma running back who transferred to the Aggies and eventually moved to defensive back.

He only had one year under his belt with the position, but the converted corner had a few things the Steve Keim and Bruce Arians loved: speed, heart and the ability to learn corner for the first time from the Cardinals coaching staff.

They pulled the trigger.

“I didn’t expect to go this early,” Williams said.

That seems to be the case with some of the Cardinals draft picks over the years. You hear a name you’ve never heard of from a school you might have heard of and said, “Hmmm…Ok”.

Then straight to Google.

The Cardinals have had an immense amount of success drafting in the mid to late rounds. Tyrann Mathieu, John Brown and David Johnson were taken in the third round. Alex Okafor and Rodney Gunther were fourth round selections, Markus Golden has been considered a steal in the second round.

When I heard Williams name tonight and thought, “Oh I think I remember him”, I was reminded of last year’s draft. Sitting at the Cardinals facility for rounds 2 and 3, I was covering the selections of Missouri linebacker Markus Golden and Northern Iowa running back David Johnson. Golden, who was slated by “experts” to be taken in the fourth or fifth round, was the second round selection.

In the post draft press conference, a reporter asked Keim and Arians their thoughts to the response by some that Golden was taken too early. Together, the two looked dumbfounded, essentially not caring about what the perception was of their pick.

From the table, they said, “Those are probably the same people who thought we took John Brown too early”.

They got their guy.

It’s a simple formula for the Cardinals: Trust your board and grab a burner.

“When you take the best guy on your board who is an athlete, and we’ve been fortunate in all three cases, he’s a speed player. You can’t get enough speed players in this round,” Arians said. “You go back through the years with the kids I’ve been involved in drafting: Mike Wallace, Emmanuel Sanders, T.Y. Hilton, John Brown, all these guys here, speed is the thing that goes with all these guys.”

The Cardinals have had their success in the draft, specifically in the middle rounds because they’ve sifted through the hype, reports, the crap and been able to see the true talent in their picks.

“Aside from Tyrann, who fell to the third round for obvious reasons, the other guys we’ve had success with in those rounds were small school guys or they weren’t over hyped in the media, and we trusted our evaluations,” Keim said.

In the case of Arians and Keim, trust your gut, and your evaluations, until it proves you wrong.