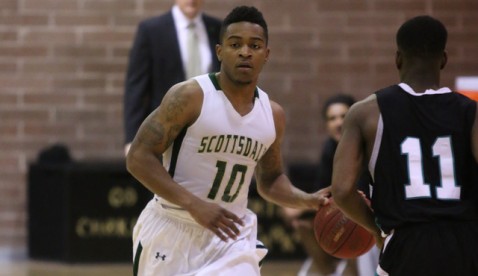 It’s not what many in the crowd would expect from Scottsdale Community College’s leading scorer in his last game playing for the Fighting Artichokes.

Especially from a player like Minor, who is preparing to compete at the next level. He already has received several offers but will take time making a decision. One thing the 6-foot-2 sophomore believes is certain: His final game at Scottsdale won’t be the last time he suits up for a team.

His bloodlines suggest he’s right. His father, Greg Minor, now a coach with the Chinese Basketball Association, played five seasons with the Boston Celtics and finished third in the 1996 NBA Slam Dunk Contest.

Minor Jr. is being pursued by a number of schools, including Western Oregon, St. Mary’s (Texas), Rogers State (Oklahoma), University of Mary (North Dakota), and Adams State (Colorado). Because of his unique journey, he will need to play at a Division II school in order to have two years of eligibility.

Minor Jr.’s coach, Mark Bunker, knows there is still some development in his player’s future, but thinks he’ll be able to handle the increased competition.

“Not saying that Greg is completely there, but he’s as polished as you can get from the junior college side to moving on to a four-year school,” Bunker said, “He’s going to make someone very happy next year.”

Bunker used the word lucky four times while telling the story of how Minor came to join the Scottsdale team. He wasn’t a typical recruit. In fact, he wasn’t a recruit at all.

Minor is from Louisville, Ky. He was working at a physical therapy clinic when he decided to take a chance and see if he could find an opportunity to play basketball.

“I called my uncle, he lives here, and I was like, ‘Hey can I try to come to school and play ball, hopefully, and give it a shot?’ ” Minor said.

His uncle gladly agreed, “so I took it upon myself to drive down here from Kentucky, a 27-hour drive.”

Minor ended up living near another school, Scottsdale’s conference mate South Mountain Community College. Coincidentally, it would be a South Mountain player who would direct him to Scottsdale.

Minor reached out to Bunker and was given the chance to try out at an open gym. This is where Bunker thinks he was the luckiest. It would have been easy to just keep the team he had and not waste time with open gyms and tryouts.

“I could’ve possibly turned away one of my best players,” Bunker said.

Bunker is now quick to tell coaches that are recruiting Minor that he “didn’t really have to work too hard with this one.”

In that final game, against Pima Community College, Minor would redeem himself a few minutes later when he was fouled after securing an offensive rebound and attempting a layup. He easily sank both shots to get his first two points of the night.

Anyone who has ever been to a Scottsdale practice wouldn’t be surprised with how easily he sank both free throws. Whenever players are given a break to get water or relax, Minor stays on the floor and shoots free throws. For him, it simulates the experience of shooting foul shots in a game.

“You’re tired, but you can’t really get water when you’re about to shoot a free throw,” Minor said.

These traits have endeared him to his teammates at Scottsdale. Especially for freshman players such as Ben Arqueros. They look to someone like Minor and see the kind of player they want to be.

“Hardest worker I have ever met,” Arqueros said. “I don’t know anyone who works as hard as him. … Practices are extremely competitive because of him. He keeps our heads 110, not 100, but 110 percent (focused).”

Minor spent most of his time on the court in the first half passing to his teammates and facilitating open looks.

“I feel like I was that piece that could drive to the hole and bring some attention to myself. So that opens up a lot of shots around the key, and they can knock down shots,” Minor said.

Within 30 seconds of the second half against Pima, Minor already has scored. Two more layups, a jumper, two three-pointers and two free throws would follow in his final half of play at Scottsdale. And although the 25 points and 105-79 win are nice, there’s something that Minor appreciates even more.

“I’ve gotten an opportunity to play basketball, which is all I wanted,” Minor said.