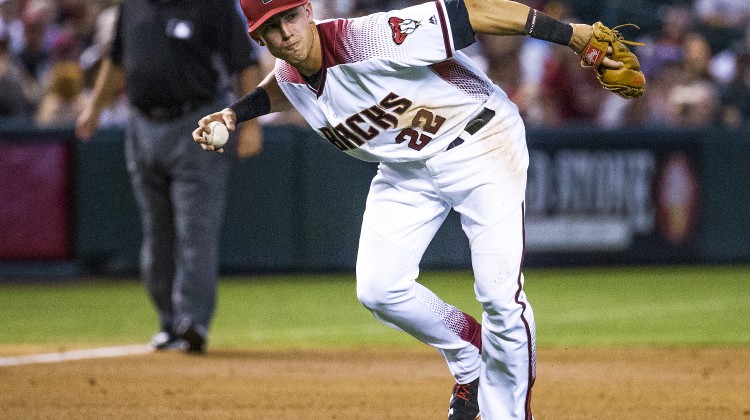 Jake Lamb of the Arizona Diamondbacks throws to first for an out against the Colorado Rockies during the fifth inning at Chase Field, Wednesday, April 5, 2016.

Jake Lamb is killing it.

A sparkling .316 average, a towering .973 OPS (on-base plus slugging, measuring not just how effective a player is at getting on base, but also how effective his hits are.

The stats are one thing, but Lamb’s performance sliding into the two hole for the injured A.J. Pollock hasn’t gone unnoticed by baseball’s insiders either.

“There are times when you can tell when a young player, all of a sudden the light switch goes on,” ESPN’s Pedro Gomez told Sports360az.com Wednesday. “They’re in the batter’s box, and they just look more confident. They look like they’re up there knowing they’re going to get a hit.”

Lamb, who raked in every level of the minors, has had streaks of success in the majors, but settled into an adequate-but-not-great .263 last year in just under 400 plate appearances. That’s a fine average for a guy who hits 20 homers, but Jake hit just six last year. His .716 OPS in the majors last season made his impressive numbers in the junior circuits look a little hollow.

“Having that confidence is a big part of transitioning from prospect to solid major leaguer,” Gomez said.

Gomez then made a comparison that Diamondbacks fans will drool over.

“We saw it a few years ago with A.J. Pollock, where he went from a guy who maybe wasn’t entirely positive he belonged to ‘Hey, I belong and I’m here and I’m going to get a hit every single time I’m up to bat,’” Gomez said.

The Pollock comparison may be apt. The centerfielder hit over .300 in two full seasons in the minors, then disappointed in his 2012 cup of coffee with the big club, hitting just .247. He improved a little, to .269, in his first full season with the team, but it was a relatively empty average, as Pollock hit just eight homers.

Then, finally healthy, his 2015 was even better, as he was one of just four 20-20 (homers-steals) guys, while hitting the best average – .315 – of anyone with that stat line outside of teammate Paul Goldschmidt.

Can Lamb make the leap Pollock made?

“With Pollock out probably for the year, somebody has to step up,” Gomez said. “A lot of times you don’t know what is inside someone, and you don’t know if they are capable, both physically and psychologically, of ceasing the moment. And right now after two weeks, you’ve got to say that Jake Lamb is absolutely ceasing the moment, and telling the Diamondbacks, “Hey, you don’t have to worry about the number two hole in the lineup. I can handle that.’

“And there will be slumps, there always are, it doesn’t matter who you are, but Lamb looks to me like he absolutely belongs at the top or near the top of the lineup.”