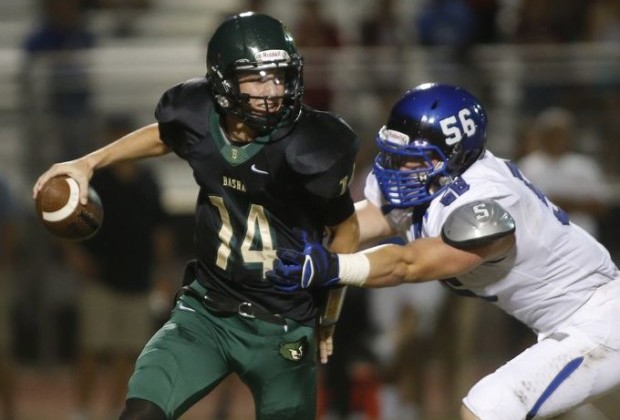 Despite being led by one of the top high school quarterbacks in the country last season, Basha football disappointed in 2015, rumbling to a 4-7 record and a first-round playoff exit.

But coach Gerald Todd is excited about his team’s prospects in 2016, and with Spring Football underway, talked to Sports360az.com about some of his players to watch and storylines to keep an eye on.

–Ryan Kelley: “Number one is Ryan Kelley,” Todd said. “Of course Ryan right now is ranked by ESPN as the number one quarterback in the nation as a dual threat. I think any time a coach gets to coach that type of athlete who’s getting those types of accolades, man you’re just excited. He’s getting stronger and just becoming a better player, so one of the things I’m really looking forward to this spring is watching his leadership and experience just take over.”

Kelley threw for 3108 yards as a sophomore and then, while throwing for 500 fewer yards, rushed for 459 yards as a junior and cut his interceptions in half. With a commitment to Oregon in the rearview, a totally focused senior Kelley will be a force to be reckoned with in the division.

–Receivers: “We have a lot of veteran receivers that are graduating,” Todd said. “We had some guys that I thought were just as good as anyone in the state, with Hunter Dean and M.J. Harris and a couple of others. And what we’ve got now is some really young talented guys who are going to fill those shoes.

“But what happens when people are going to press them or are going on them in man coverage. How are they going to handle that? The speed and strength of the next level.”

Part of that gap will be bridged by the veteran presence of a special talent on the outside.

“Terrell Brown,” Todd said. “Terrell is just an athlete. He comes from a pedigree, his mother played volleyball at ASU. He’s a three-sport letterman. Last year he caught for over 1000 yards, played basketball and that team went to the semi-finals, and he’s running track now. He’s one of those kids that just can do a lot of things and are special.”

Brown caught 82 balls last season as a junior, and figures to be among Kelley’s top targets once again this year. But the development of the young up-and-comers will be crucial to Basha’s success. Among those potential newer receiving threats are a set of twins.

“Connor and Cody Collins,” Todd said. “The two have kind of worked themselves into playing. They’re a couple of kids that last year they kind of played sporadically on the varsity, but those two kids, they get in the weight room and they bust their butt every day and they get out on the field and they never ask a question, they just come to work. They’re both about 6 foot, they’ve got good strength level good speed, and I’m hoping they have a breakthrough year this year.”

–Pass rush: Todd pointed out that much of last year’s defensive line is graduating.

Part of the pass rush that remains from last season, however, could be an answer to prayer already in place.

“Zack Watkins is an outside linebacker,” Todd said. “He’s a guy that moved from from defensive end to the outside backer. He’s just versatile, he runs well, strong, aggressive, one of those kinds of kids that you need on the defensive side of the ball.”

–Protection: They say a quarterback is only as good as his protection, and in Kelley’s case, that might be true, because he’s got at least one truly dynamic player guarding him on the front line.

“Jonathan Nathaniel,” Todd said. “He’s an offensive tackle for us who played and started for us last year and, man, he’s just made great leaps and bounds strength-wise and leadership-wise. He’s got about five Division-I offers right now, so I’m excited about him and how he’s going to lead that offensive line. That’s going to be so important for us.”

–Defense: There’s no two ways about it: the Bears gave up a lot of points last year. Not a typical result for a Basha program. In order to improve on their frustrating performance last season, they’re going to need to tighten things in the secondary.

Todd believes they’ve got the personnel to do it, and one of the players who’ll be key in the improvement only showed up halfway through last season.

“Bryce Ashcroft, who’s a strong safety, came in about halfway through the year and it’s just been a pleasant, pleasant surprise,” Todd said. “He’s worked hard through this spring and we’re looking forward to things from him.”