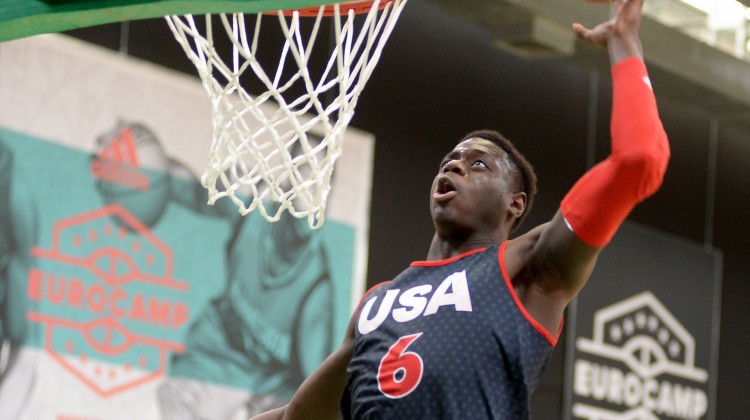 While the attention to the Wildcats run in March is at the forefront, what Sean Miller and his staff are accomplishing for their 2016 class continues to turn heads around the nation.

On Monday night, Arizona added their third five-star prospect to their 2016 class as shooting guard Rawle Alkins announced his commitment on ESPN. The 6-4, 200 pounder is ranked the number the 20th overall prospect in the nation and third overall shooting guard according to Scout.com. He is originally from the northeast but now attends Word of God Christian Academy in Raleigh, North Carolina and was down to Arizona, North Carolina, North Carolina State, St. John’s and UNLV.

Alkins fits the Sean Miller mold as he has made a name for himself with his rugged play and ability to play defense on the perimeter. He joins 6-5 point guard Kobi Simmons from Georgia as well as 6-10 Center Lauri Marklanen from Finland who are both five-star prospects according to Scout.

Arizona doesn’t seem to be done there with Alkins as their are in play for the number two ranked overall prospect in small forward Josh Johnson from Michigan but is now at Prolific Prep in Napa, California. Kobi Simmons is doing some recruiting on Twitter for Johnson and with Terrance Ferguson who is a five-star small forward who recently de-committed from Alabama.

Hey #Beardown?⬇️ blow up @the2kferguson notifications and get him to Arizona !! Show him wildcat nation ⚪️??

News also came down on Monday from the Pac-12 as they announced their all-conference teams as selected by the head coaches. Senior Ryan Anderson was named first team all Pac-12 after averaging 15.8 points and 10.2 rebounds. Senior Gabe York was named to the second team along along with fellow senior Kaleb Tarczewski. “Zues” was also named to the all-defensive team. Finally, Allonzo Trier was named to the all-freshman team.

Arizona Begins play in the Pac-12 Tournament on Thursday as the four seed and play the winner of Colorado and Washington State on Thursday from Las Vegas.