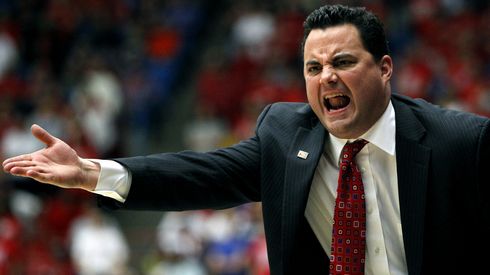 A No. 6 seed in the NCAA Tournament isn’t what you sign up for when you’re the University of Arizona.

“Arizona’s one of the best programs in the western United States for the last 25 years, (Miller’s) not going to have very many opportunities to use the ‘Hey we’re the underdog’ card,” Jacobsen told Sports360AZ.com’s Brad Cesmat on Monday. “He can use it now” Jacobsen has watched a lot of Arizona basketball, and said he probably agrees with the Wildcats’ seeding, based on their resume. But, he said, based on talent and opportunity to succeed, Arizona could easily be a lot higher.

“I often ask, ‘how good is your good?’” Jacobsen said. “Because some teams, yeah they’ve won some games, they might have an impressive resume, but what’s their potential? When they play well, can they make a Final Four? There’s a lot of teams that I don’t really believe that they can. Like a team like Villanova for me, I think they’re good is just – it’s good but it’s not great. I think when Arizona is playing really well, moving the basketball, digging in on defense, feeding the post, playing inside out, Arizona’s good is better than Villanova, who’s a 2 seed.”

Jacobsen praised Miller’s handling of the team, who’s had what he termed an “up and down” season. He commented on the weight Miller places on intensity on defense, saying that even a 20-point scorer won’t play for Miller if he doesn’t play defense.

Jacobsen also pointed out that players like freshman Alonzo Trier and transfer Ryan Anderson came to Arizona for the stage of big games in March. He said he thinks that opportunity might just drive some of the key players for the Wildcats.

And while the South is probably the toughest conference in his eyes, Jacobsen likes Arizona’s chances.

“Arizona is as scary a number six seed as I can remember,” Jacobsen said. “Nobody wants to play them.”