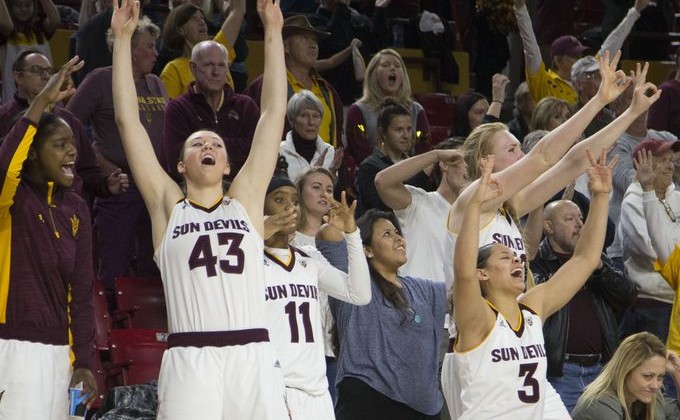 As Indianapolis prepares to host the NCAA Women’s Final Four, most of the focus is on the Connecticut Huskies’ attempt at a fourth consecutive national championship and maintaining a 73-game winning streak in the process.

Is that a good thing? A Boston Globe columnist said over the weekend that the Huskies’ dominance is “killing” the sport.

In 12 years of broadcasting Arizona State women’s basketball, I’ve seen the sport grow. Maybe not as fast as other sports, but it is growing, and UConn is a prime factor in that growth. Just consider–would there be as much attention on the sport this week WITHOUT UConn?

It’s not fun to be on the receiving end of a blowout at the hands of Geno Auriemma’s team, but the undeniable truth is people tune their TV sets to see what UConn is doing, even if they tune out at halftime. The bigger issue for the sport is what happens when UConn’s dominance comes to an inevitable conclusion.

The answer may actually be available right now here in the Valley. Phoenix is home to two women’s basketball teams, Arizona State and the WNBA Phoenix Mercury, that seem to be doing quite well on the court and at the box office in a market often described as being too crowded.

This past season, ASU’s crowds gradually gained in numbers and intensity, culminating in a second round NCAA Tournament game against Tennessee that was as loud and intense amongst the patrons as any game Wells Fargo Arena staged this year. The Mercury have consistently drawn crowds nearing five figures, and often have exceeded them. Their fans have grown accustomed to seeing two things – competitive basketball and game entertainment similar to that of its NBA counterpart.

Rest assured UConn’s run will end. UCLA seemed to be indestructible in men’s basketball in the 1960’s and 70’s, but when Coach John Wooden retired, the Bruins’ dominance went with him. Larry Brown took the Bruins to the title game in 1980, Jim Harrick won a National Championship in 1995, and Ben Howland had UCLA in back-to-back title games ten years ago, but the Bruins stopped being unbeatable as soon as Wooden wrapped up his career.

The sport survived. Indiana went undefeated in 1976, Al McGuire won a title with Marquette in 1977, and two years later, Magic Johnson and Larry Bird paved the way for the explosive growth of the sport on television in the 1980’s.

It’ll likely be the same with UConn. What most of the critics don’t know is that university athletic directors and conference TV networks have realized the revenue potential in women’s basketball. As a result, school have more money to hire and keep top coaches, and increase recruiting budgets. When Auriemma’s reign ends, teams around the country will be ready to battle to take the top spot.

One other thing – don’t be surprised if UConn’s current run ends this weekend. ESPN analyst Debbie Antonelli mentioned at the end of the Washington-Stanford regional final that the West Coast Huskies COULD give the East Coast Huskies a game based on Washington’s ability to score points in a hurry. Guard Kelsey Plum and Phoenix St. Mary’s product Chantel Okafor could pose problems if they get going offensively. Of course, Washington has to get by Syracuse first. UConn’s semifinal opponent, Oregon State, could also make life for Auriemma difficult if 6’ 6” center Ruth Hamblin and guards Jamie Weisner and Sydney Wiese (a product of Phoenix’s Pinnacle High School) are able to knock down shots early.

You might have noticed in that last paragraph that three Pac-12 school were mentioned. Despite the disappointment of ASU’s loss to Tennessee, the Pac-12 has become the story of this postseason.

With five teams in the NCAA’s and two in the WNIT, Pac-12 women’s basketball is a combined 20-4.

They placed four teams in the Sweet 16 in the NCAA, three in the Elite Eight, and two in the Final Four, all conference firsts. Should Oregon win the WNIT (the Ducks are in the semifinals as of this writing), they would give the Pac-12 back-to-back WNIT titles, as UCLA won the event last year.

UConn is NOT killing women’s basketball. Geno Auriemma is right – the Huskies are making the sport better by forcing everyone else to try to keep up.