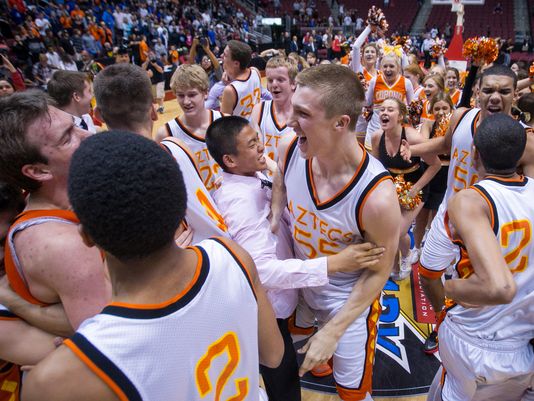 “The hardest part about leaving? My mom. My family.”

Connor MacDougall, the 6-foot-8 forward, is turning in his Arizona roots for a spot on the New Mexico Lobos basketball team.

“It’s hard since this has always been home,” MacDougall said. “But I’m ready to spread my wings.”

The Corona del Sol product transferred from Arizona State to South Mountain Community College after a season-ending shoulder injury. But after a consistent relationship with New Mexico, the choice to take the next step in his career was an easy one.

“They started recruiting me as a junior,” he said. “They always stressed to me ‘we’re here for you, we’re here if you want us, it’s too bad we don’t have you’ and now that I was free again, it picked up right where we left off.”

The highly recruited forward said Lobos’ head coach Craig Neal always made him feel comfortable, which was special to him.

“It was nice for me just because for five years they hadn’t changed their consistency.” MacDougall said. “It just felt normal. It just felt right. It didn’t feel like I needed to see if they were real or not. It just felt like family. “

South Mountain Community College’s season ended Saturday with an eighth-place finish in the Division II national tournament and MacDougall averaged 22.3 points and 9.8 rebounds in his final four games. Assistant coach John Ortega says filling the hole left by the tenacious player is going to be a challenge for many reasons.

“(That’s) going to be really tough to do that,” Ortega said. “He’s really a once-in-a-longtime player at our level.”

MacDougall’s talents are obvious on the court, but it is when he steps off, you see the humble yet vibrant guy he is.

“He always had this team ready to play and focused, (but) I’m going to miss his sense of humor,” Ortega said. “He’s always got this team laughing. He’s all business on the floor, but has you in stitches off.”

“I’ve (known) C-Mac since he was a senior in high school. I’m extremely excited about watching him continue his career in New Mexico.”

MacDougall is looking at the jump as a fresh new start. His college career has yet to be all he hoped for. He played a total of 23 minutes at ASU before tearing his labrum, ending his season.

New Mexico already has discussed plans of filing for a medical hardship waiver in order to regain that season’s eligibility.

“In my own mind, that’s where I felt I could go and have the best career that I could,” MacDougall said. “I can kind of be one of the starters and be one of the guys. (Neal) told me that’s what he expects from me.”

Because of his size, the unshakable MacDougall has normally been used as a post-up big. But Neal plans to utilize MacDougall’s strengths elsewhere on the court, which furthered “C-Mac’s” desire to become a Lobo.

“I’ve worked so hard, I’m so quick now,” MacDougall said. “All my ball-handling and all my stuff is not exactly that standard post-up big, which normally I am because I’m the tallest guy on the team. Neal wants to use me in different ways that I felt match my game a lot.”

Eager to get started at his new school, the No. 107 player overall for the Class of 2014 by Rivals.com is doing all he can to show up in the best possible shape and take the future head-on. MacDougall has reached out to different training facilities and players from his past to grind out his preparation.

“I’ve been studying a lot and talking with Neal a lot on things he would like to improve on,” MacDougall said. “I’ve just more and more become a student of the game. I’m trying to get my IQ as high as I can so when I get there I can start learning their system and be a little bit ahead of the curve.”

All the thoughts that could possibly create a pit of nerves in the stomach are non-existent.

MacDougall is full of optimism about becoming the “new guy” and leaving a place he has known so well his whole life.

“I’m a creature of habit. I’m a homebody. It’ll be a change, but my life pretty much consists of school, basketball, food, and sleep.”

The only thing that concerns him?

“The elevation. It’s 5,000 feet above sea level. That change is going to be killer.”

New Mexico, hope you are ready for the 6-8 MacDougall, because he sure is ready for you.