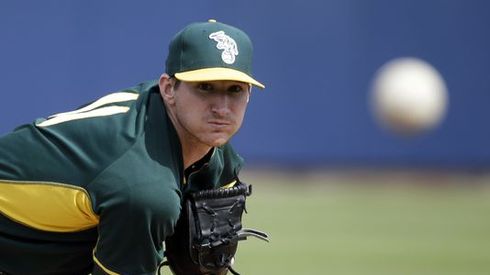 The Oakland A’s pitcher, who started his career with the Arizona Diamondbacks, took the mound for the first time last week after nearly a two-year absence from the major leagues.

The last pitch Parker threw was in 2013. Last week he threw 26. He added 40 later in two simulated innings with no setbacks.

Oakland A’s manager Bob Melvin said it’s not out of the question the right-hander could be available by the All-Star break.

“I feel good,” Parker said, “Once I got over the initial sore feet and sore legs like everybody else. I think everybody’s arms are starting to get in shape and mine is you know, I’ve been working back to do that. So I think all the work is kind of coming full circle.”

Parker underwent his second Tommy John surgery in the spring of 2014. While in recovery, Parker suffered a horrendous elbow injury throwing a pitch. The injury was ruled a fracture and required a third elbow surgery.

Such drastic injuries are likely to end a pitcher’s career but Parker is determined to rewrite the odds.

That talk of him returning midseason even exists is remarkable consider his bumpy journey.

The Diamondbacks were thrilled when they drafted the high school standout in 2007. Expectations were high. But during his journey through the minor leagues, he underwent his first Tommy John surgery.

He made a promising major league debut in September of 2011 but was traded less than three months later to the A’s by the D-Backs, who said they gave up the young talent to acquire more depth and veteran leadership on the mound.

Just before 2014, Oakland announced he would undergo his second Tommy John surgery.

Oakland remains faithful to the young pitcher. The team has prepped a soft approach in easing Parker back into shape.

“It’s nice to have Jarrod Parker back. It’s been a tough stretch for him,” Melvin said. “I know he feels good about it, but we’re in no hurry to get him ready. He’s throwing bullpens right now (and) we don’t have a game scheduled for him yet. But just the fact that he’s back and doing things with everybody else I know makes him feel good and makes us feel good.

Although the hoopla around a comeback can be distracting, Parker puts on his blinders and refuses to veer from determination.

His mindset for the season is simple, yet focused.