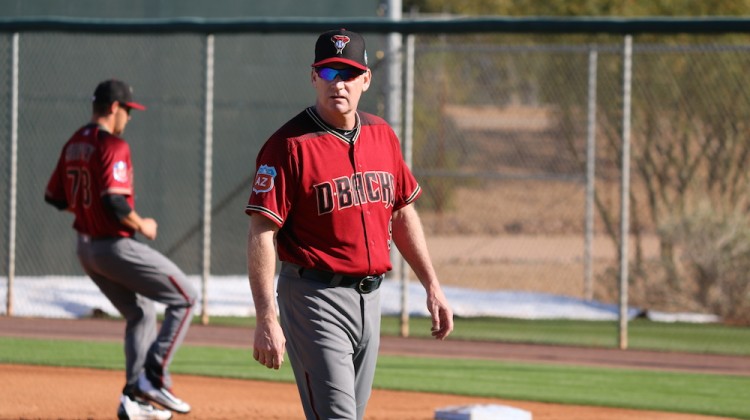 1. Jean Segura has looked amazing so far at the plate, and D-Backs fans are going to want to get pretty excited. That’s fine, and he’s a streaky guy with power and speed who could put something together this year, but don’t overreact to an impossibly small sample size. He’s not going to hit .700 this season, and the fact that he hasn’t walked yet or stolen a base, despite attempting the latter twice already, don’t speak well towards his chances of settling in at the top of the lineup. But it’s all based off small sample sizes. Look more at this guy’s body of work to get a feel for what he can be. He’s a minus fielder who needs to move to a new position this season, and his breakout 2013 is getting farther and farther in the rearview. If the guy can learn to take a pitch he’s got the other tools necessary to fill in the leadoff role for which A.J. Pollock is probably overqualified.

2. The guy D-Backs fans might be wiser to get excited about, however, is potential fourth outfielder Socrates Brito, who, despite his Segura-esque poor walk rate in the minors, has the speed and contact ability to possibly mask that and work his way into the leadoff spot by mid Summer. He stole 85 bases in the last three seasons between single-A and double-A and hit .303 in last year’s cup of coffee with the big club. He’s another guy that needs to learn to take pitches, but if he can grow in that part of his game he might be the contact-speed guy this team has relatively little of.

3. Absurdly early, admittedly meaningless returns on the Shelby Miller trade: Miller has given up five hits and two earned runs in two innings of work, Dansby Swanson has four hits, including a double and a triple in 14 at bats, though he HAS struck out three times. Of course, Swanson’s got the great asset of his fielding as well. Ender Inciarte is hitting .400 with a steal. Swanson isn’t by any means likely to make the team this season, but D-Backs fans won’t be able to help keeping an eye on both players for the next several years.

4. Pedro Gomez told Brad Cesmat of Sports360AZ.com that Yasmany Tomas has come into Spring in better shape, at the extreme urging of the Diamondbacks brass. Tomas doesn’t have a ton of competition in left field (Socrates Brito notwithstanding) and there’s no question, as Gomez reiterated, that the D-Backs are going to want to try to get all they can out of him considering how much they’re paying him. Getting in shape is definitely a step in the right direction, proving he’s willing to work and make changes and adjustments according to what Chip Hale and the coaching staff request of him. He’s 0-5 so far this Spring.

5. It’s time to start dreaming about Peter O’Brien and Brandon Drury. O’Brien is apparently officially converted to the outfield after catcher didn’t work out for him. He’s off to an up and down spring, but he’s got one of what should be many home runs to come already in the spring. Here’s a guy who hit 49 homers over the last two years in the minors, really only comprising a season and a half of work. Drury is hitting .429 this spring with a homer two doubles and four RBI. His cup of coffee was underwhelming last season, but he’s only 23. As a reminder, both guys are effectively products of the Justin Upton trade – Drury came over from the Braves in that deal, and O’Brien was part of the deal that sent Martin Prado, the main part of the original Upton deal, to the Yankees. It might be almost time for the D-Backs to finally start reaping the benefits of that franchise-changing move.