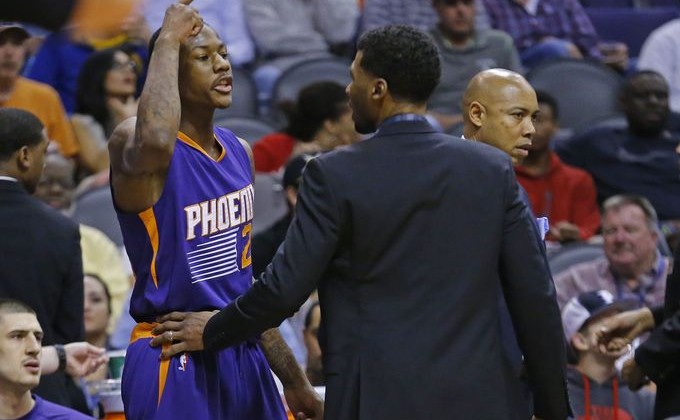 On a night when the organization was honoring Ring of Honor member Walter Davis, the Suns were hoping to play the role of spoiler by beating the Golden State Warriors in their last game going into the All Star break.

It was not meant to be. The league-leading Warriors beat the Suns 112-104 Wednesday in front of a sellout crowd at Talking Stick Resort Arena in a meeting overshadowed by an in-game teammate dispute.

During the first quarter, a brief dust-up occurred between Markieff Morris and Achie Goodwin on the bench during an early timeout. Morris appeared to be upset with some of the play of Goodwin, which included an early turnover, and the argument escalated when both players started to shove one another, though it was quickly broken up by the rest of the team.

Watson characterized the incident as a “pushing match,” but says it is not a sign of division among the team.

“I wouldn’t say it was a fight…Markieff was trying to motivate Archie,” he said. “We can’t let the challenge create emotions.”

Morris said it the scuffle was just something that comes with being a leader and holding teammates accountable. He acknowledged it should have probably been handled differently, but downplayed the overall impact of the incident.

“That’s nothing. That’s part of being a leader, being big brother,” he said. “Sometimes little brothers and big brothers get into it…I apologized to him. That’s my little brother and we’re going to move forward with no hard feelings.”

Goodwin echoed similar sentiments and continued the theme of this being a simple disagreement among teammates.

“We’re family,” Goodwin said. “It happens. I love him like a brother, he loves me. That’s all I have to say about it.”

The Warriors head into the break on an 11-game win streak, while the Suns have lost their fifth straight game since firing former coach Jeff Hornacek.

“It’s shocking really. I mean, nobody has ever done it,” Warriors coach Steve Kerr said. “So 52 games in and we only lost four games is remarkable and obviously speaks to the talent and the chemistry of the players.”

Reigning MVP Stephen Curry scored 26 points along with nine assists and nine rebounds for the Warriors, and did not play the entire fourth quarter. Klay Thompson accounted for another 24 points and five steals.

Morris scored 19 points, grabbed eight rebounds, and dished out four assists. Goodwin added another 20 points, while Tyson Chandler and Devin Booker each had a double-double. But the stand-out performances did not lead to a win, which is all Interim coach Earl Watson cares about.

“We’re not here for individual stats…we’re not here to celebrate personal merit, it’s all about team,” he said. “No one even cares, we lost. We’re trying to find a way to win.”

The Suns played the Warriors close in the opening half of the game, and would lead by two points about midway into the second quarter. But a 16-0 run lead by Curry and Thompson would allow the Warriors to pull away. The Suns did not get within 10 points of the Warriors after that run until 4.9 seconds in the final quarter.

The Suns have lost nine in a row going into the All Star break. They are looking to use the time off as an opportunity to get players back from injury and finish the rest of the season on a positive note.