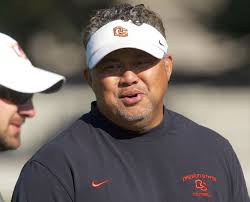 “While Joe’s accomplishments and accolades over the years, especially during his time in Corvallis, speak for themselves, it’s who he is off the field that will truly benefit this program,” Coach Graham said. “He’s a gifted recruiter with deep ties across the West, and a proven developer of young men who gets the most out of his players. Joe will be a great fit in both this defense and this community.”

“There is a long list of reasons why I decided to become a Sun Devil, but some of the aspects that really stood out to me were Coach Graham’s defensive philosophy, the diverse and talented staff he has established, and a school and community that truly love their football program,” Seumalo said. “I’m looking forward to getting to work.”

Seumalo, who was ranked by Rivals.com as one of the top recruiters in the Pac-12 in 2013, mentored some of the most imposing defensive lineman in conference history, including Stephen Paea, a second-round draft pick by the Chicago Bears in 2011, and 2014 third-round selection Scott Crichton.