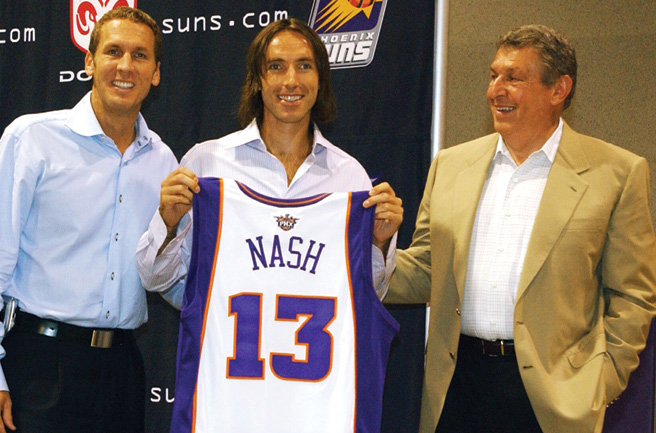 Luke Walton, David Blatt, and John Calipari are all names that have been thrown my way in the hours since Jeff Hornacek was taken out as head coach of the Suns. One report that popped up today on a national level makes plenty of sense for Suns Owner Robert Sarver. Steve Nash. This idea of Nash was first published by Chris Mannix at S.I. com http://sports.yahoo.com/news/could-steve-nash-be-an-option-for-suns-153646872.html

Is Steve Nash ready to start his post-NBA career as a coach of a franchise that is at rock bottom?

Would he be able to work in the current structure of the organization? Look at what goes on with the top franchises in the NBA. In San Antonio they have an owner who no one knows or hears from(Peter Holt). They have a coach and general manager who work beautifully together. Obviously, having three future Hall of Famers makes life pretty easy on the court.

Dallas Mavericks owner Mark Cuban should be given a ton of credit for keeping his franchise relevant in good and bad times. There hasn’t been any panic on his part. Players want to go to Dallas.

What is the current draw to come to Phoenix? Seriously?

After the firing of two assistant coaches and now Hornacek, you would think that Ryan McDonough and Lon Babby would be the next ones to go. They are the ones that assembled this current roster and handed out mind-numbing contracts. They are the ones that jettisoned Isiah Thomas and Goran Dragic. At some point doesn’t management have to be held responsible for this mess?

In terms of Robert Sarver selling the team, that’s not going to happen. When you pay over $400 million for a product and then it becomes worth a billion dollars(Forbes Magazine latest rankings) what would make Sarver sell? So forget about that happening. The franchise is stuck in the ditch. Would Steve Nash want to take over a task as difficult as this one?