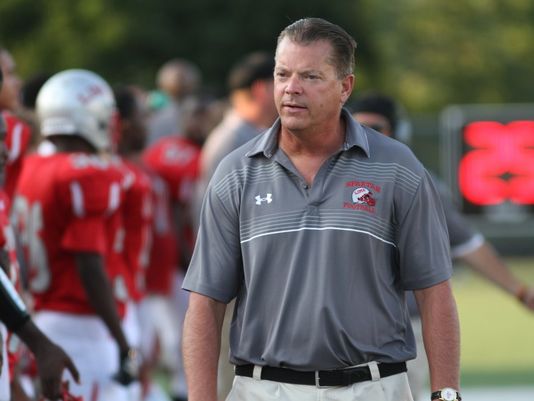 Mike Fell was looking for a change, and Mountain View needed one.

The head coach at Lima Senior in Northwestern Ohio and his wife were ready for something new. After 30 years in Ohio, 25 as a head coach, Fell was ready to relocate. His daughter lives in Scottsdale, so he looked at the job openings in the Valley. He quickly zeroed in on Mountain View as the place for him.

“I actually looked at all the jobs that were open in the Phoenix area and I saw there were seven or eight jobs,” Fell told Sports360AZ.com. “And I kind of looked at them, and the Mountain View job stood out and once I saw their past history and visited the school and everything I knew that was the job I was trying to get. I was excited when I saw there was an opening and was excited I got to interview for it.”

Fell was attracted by the tradition, the people, and the mentality at Mountain View. He said it was clear that was the place for him.

“The goal of football is really to win and have fun,” Fell said. “You’ve got to have a combination of both. And I looked at Mountain View and at their academics and the school and I knew there wasn’t going to be another school, in my opinion, that had as much of everything as they had.”

Fell reportedly beat out a number of well-known Valley coaches for the job, including Paul Moro and Bernie Busken, and while he says he’s not sure exactly what Mountain View was looking for, he’s confident he can deliver.

“I know they had a lot of success for 30 years and then the last 10 years or so not as much, and I don’t know if they wanted to change it up and try something or what,” Fell said. “I do know that I’m pretty confident in what I’m doing and they might’ve liked that. It’s a tough place to coach, I’m sure. They have high expectations. They’re used to winning, and I know they felt like I could handle the situation”

Fell brings with him an exciting, up-tempo offense that might look familiar to Pac-12 football fans. It’s a model similar to Mike Leach’s Air Raid.

“We get up and down the field. It’s a tempo offense,” Leach said. “We have four wide-outs usually, but we can also put two running backs in the back field. The thing I like is it’s a passing offense, but we’re able to run with it. I’ve had 1000-yard running backs the last five years and quarterbacks who have thrown for 3000 yards each year. It’s one of those things where it’s run and pass, you can do both.

“The thing is I’ve been running it for ten years, so it’s a system, not just a set of plays. So if things aren’t working one way I can fix it.”

Coming from an urban area in Northwestern Ohio to Mesa, Fell knows he’ll be seeing a big difference in landscape, but he’s ready for the change. He’s impressed already by the character of the kids at his new school.

“I’d just say that judging from what I’ve seen, it’s the work ethic,” Fell said. “There’s young men who will do whatever they have to do to accomplish something. It’ll be fun to coach kids that are really excited about what they’re trying to get done and are really ready to put forth the effort that way and you don’t have to coax them to getting to practice or talk them into getting to the weight room. They’re there and they’re ready to work for you.”