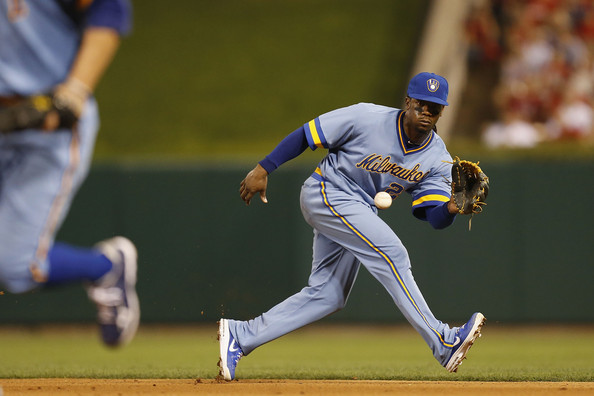 The battle for the middle infield positions during Diamondbacks Spring Training in 2016 got that much more interesting on Saturday as the team signed veteran second baseman Rickie Weeks to a reported minor league deal and spring training invite.

At this point, the 33 year old second baseman will be competing for a roster spot on the D-Backs bench to possibly provide some pop in pinch-hitting situations. Over his career, he has been known to crush left-handed pitching with a .260 average, .828 OPS with 43 home runs and 106 RBI in 1100 at-bats.

After spending 11 years in Milwaukee, Weeks saw time left field last season with the Seattle Mariners before being released in June of 2015 after hitting just .167 with a .267 OBP through 37 games played. Weeks has not been productive on an every day basis since the 2012 season where he played in 157 games hitting 21 home runs with 63 RBI’s and a .323 OBP.

It would seem the Diamondbacks would continue to stick with their young players in the middle infield with Jean Segura, another former Brewer, bouncing back and forth from second base and shortstop while Brandon Drury and Phil Gosslin compete at second base as well. In the outfield, prospects Socrates Brito and Evan Marzilli are competing for outfield bench spots well. Both those two young outfielders are lefties as well which is needed on the bench.

Weeks would need to come in and perform right away in spring training to make the Diamondbacks run with him over these young players eyeing a jump up to the big league club. But in the onset, he provides a veteran presence for a team that continues to look more and more like a club that is going hard at a division title and playoff appearance this season.