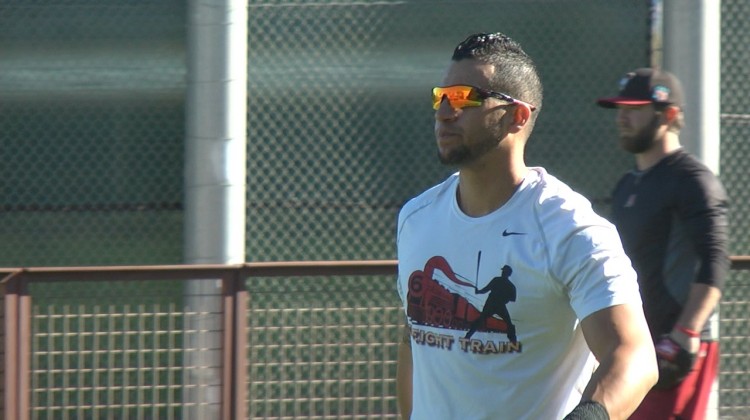 Spring Training 2016 is officially underway as the Diamondbacks pitchers and catchers officially reported to Salt River Fields at Talking Stick on Wednesday. It was technically the first day but from what the players and coaches were saying, much of the team has already been reporting to the facility for weeks. David Peralta and A.J. Pollock mentioned that it is the most they have seen compared to past years.

Manager Chip Hale as well as many of the players spoke on Wednesday and here are some notes on the team as they break for their first practice on Thursday:

Hale stated that their huge free agent acquisition, Zach Greinke, will be their opening day starter. How the rest of the rotation will pan out will remain to be seen and could be based on their schedule to begin the season. He considers Patrick Corbin and newly acquired Shelby Miller to be number two and two-A. Robby Ray, Rubby De la Rosa, Zach Godley, Archie Bradley and also sinker baller Tyler Wagner (who came over from Milwaukee with Jean Segura) are all competing for the last two spots in the rotation.

As for the bullpen, many were impressed with the signing of Tyler Clippard for the back end of their bullpen but as it stands now, Brad Ziegler will remain the team’s closer with the trust he established with Hale. Clippard and Daniel Hudson are slated to be seventh and eighth inning guys as things get going this spring.

David Peralta has earned his spot as an every day player for the Diamondbacks and will be moved from left field to right this season. Hale mentioned that Peralta came up in the system as a right fielder but was moved to left a year and a half ago. Peralta wasn’t really sure why. He will be given the opportunity to remain in the lineup against lefties and be in the lineup every day. With his move to right, Yasmany Tomas will move to left. Hale mentioned that Tomas is in great shape and spent much of the offseason in Phoenix working with the team’s strength and conditioning staff. There was no mention of Tomas at third as Jake Lamb and Brandon Drury seem to be the only two in line for that position.

As for Drury, he told me Wednesday that he has brought his weight down to be ready to compete at second base. He explained there is an adjustment between second and third and reps that he plans to take at second this spring will make him more comfortable in that role. He is confident in playing both spots this season.

Speaking of middle infield, there was a lot of talk with Nick Ahmed about where he stands after the team added Jean Segura from the Brewers. Chip Hale said he spoke to the young shortstop after the trade was made and as any good, developing athlete will tell you, he embraces the competition and that complacency does not help a team. There will be a significant competition at that spot and Ahmed admitted that he cant get off to the slow start offensively like he did in 2015. Hale mentioned that with players like Ahmed as well as others defensively, the Diamondbacks could have the most fundamentally sound team in baseball. He stated that adding that with talent, it could result in a lot of wins.