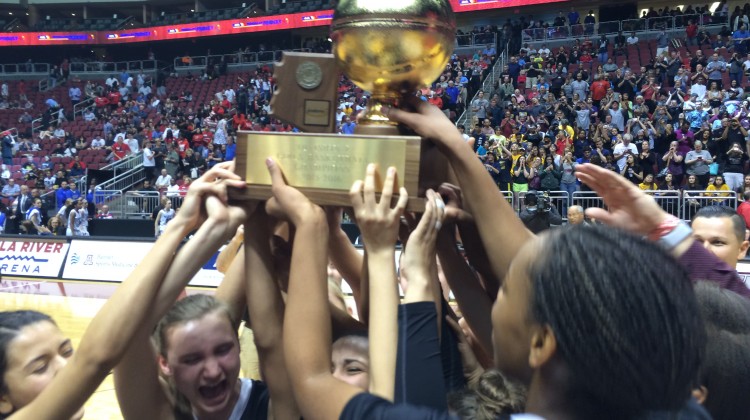 Hamilton overcome their lower seeding to upset top-seeded Mesquite in the Division I girls championship game, earning head coach Trevor Neider a title in his first season as Huskies coach.

“It still hasn’t hit me yet,” Neider told Sports360AZ.com after the game. “I’m still nervous like the game’s going on, but it’s great. I’m so glad for these girls and happy for them.”

The Huskies were led by the dominant play of center Maya Banks, whose size and tenacity down low proved unstoppable against the small-ball Wildcats.

“We knew that they would sandwich her and bracket her a little bit,” Neider said. “She gets beat up a lot but she’s a great kid and just kind of goes with the flow. She knows what’s coming, and she doesn’t complain or let it get to her.”

Banks nearly had a double-double in the first half, and easily eclipsed that mark, tallying 18 points and 14 rebounds by the end of the lopsided contest.

Banks and forward Cardi Harris combined for 9 rebounds under the Wildcat basket, leading to numerous second- and even third-chance buckets for the Huskies.

“We knew we had a little advantage on the glass,” Neider said. “With Cardi’s athleticism and Maya’s size… We shot pretty well, but the couple of times we did miss we were able to get a hand on one.”

The Huskies shot 48.9 percent from the field on the game.

Defensively, the Huskies were able to contain the Wildcats’ high scoring guards, Shaylee Gonzales and Lindsey Vanallen, who averaged over 20 and 18 points per game on the season. Gonzales managed just 17 points, and Vanallen only 6.

“They’re great shooters,” Neider said. “We’ve got to hope they have an off night, and we’ve got to get the ball inside and hope we shoot well.

“There wasn’t a lot of tricks,” Neider said.