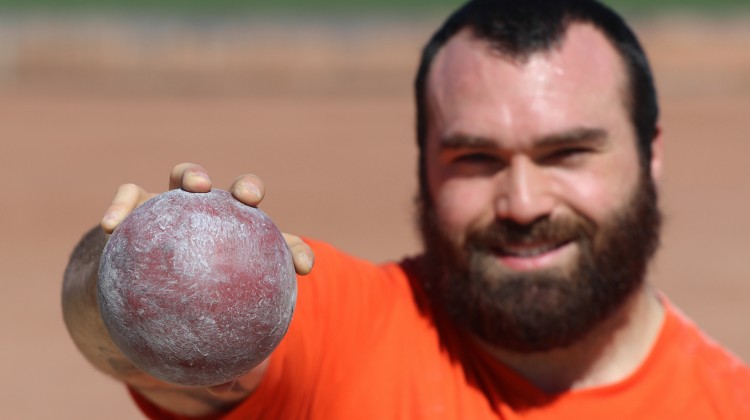 He was born in Anchorage, Alaska, but ended up in the desert.

He started competing in shot put when he was 13 although he had zero understanding of the sport.

He could have played football but chose a heavier ball when he went to Arizona State.

Now, years later, despite constant obstacles including a possible career-ending injury, shot putter Jordan Clarke is training for the highest level of competition in the world: the Olympics.

When a physical education teacher approached him in middle school about participating in track and field, he already was involved in football and wrestling. He didn’t even know shot put existed.

“I watched the Olympics in 1996 and 2000 but it was mainly for swimming or sprinting,” Clarke said. “The year I started throwing, I had no idea what I was doing even though I kind of enjoyed it.”

When Clarke was 17, he thought it would be a cool idea to become an Olympian after watching some of the top competitors in the world on TV. Although he was also heavily recruited to play football, he pursued his Olympic dream and moved from the cold to the heat at ASU.

Two months after Clarke enrolled, he had to face tough news for an 18-year-old: He had two herniated discs in his lower back.

While the college transition was already hard, going from a 12-pound ball to a 16-pound one, the injury proved particularly difficult because he had an abnormally shaped spine.

“It was very tough on him because he thought his future was going to be great,” ASU assistant track and field coach David Dumble said. “If you understand someone with a back injury, it compensates with everything, like walking, throwing, lifting.”

Clarke didn’t believe in quitting, however, and the more negative feedback he received from doctors, the angrier and hungrier he became.

“When someone says you can’t do this or that, my reaction was ‘I want to do it, I’m going to and I’m going to find a way to do it,’ ” Clarke said.

With Dumble’s help, Clarke was treated with several injections to help cope, and altered his training to avoid pain from the injury. He started to find ways to work around the pain.

Entering his junior year as an underdog, Clarke captured his first national title, winning the NCAA Division I Outdoor Championship.

His dad, Michael, was the only one at the competition watching Jordan. It was a hot sunny day and Michael had left his phone out.

“The phone was sitting out in the sun for too long and it was overheated,” Michael said. “I had to borrow a phone from others after Jordan won so I can call my wife. Of course, she was crying and we both were really proud.”

After Clarke won, the next couple of years went smoothly. He finished his career at ASU with two NCAA Outdoor titles, two NCAA Indoor titles, and three consecutive titles at the MPSF Conference indoors and the Pac-12 Conference outdoors.

Clarke would later be challenged with a new injury, a torn tendon in the index finger of his throwing hand. He battled through it, even though hands and fingers for shot-putters are just as important as they are for pianists.

After Clarke graduated from ASU in 2012 and continued to pursue his career, he settled with his wife in the Valley. He took fourth with a throw of 20.78 meters at the 2014 USA Indoor Track and Field Championships, won the 2014 Pan American Sports Festival, and made his debut on the 2015 IAAF Diamond League circuit. He achieved a personal record of 21.49 meters in the finals of the 2015 USA Outdoor Track and Field Championships.

In 2015, Jordan also competed in the 15th IAAF World Championships in Athletics at Beijing Olympic National Stadium. Although his performance was below his expectations, it was a good experience for him because the event was very similar to the Olympics.

“You used to watch all of those great athletes competing on TV, but I was actually there competing against them that time,” Clarke said.

Training with another Olympian and two-time world champion, Ryan Whiting, and continuing to get help from Dumble, Clark’s is fully immersed in his first year of full training.

If Clarke was from somewhere else, things might be easier for him because not many shot putters from other countries meet the Olympics standard. The United States dominates the sport and approximately a dozen already have met the standard. Only the top three finishers from Olympic Trials competition in Eugene, Ore., on July 1 will go to Rio de Janeiro for the Summer Games.

“If you are doing well on that day, you are going, but if you don’t have a good day, well …” Clarke said.

It’s amazing to think who he was 12 years ago, a boy who had no idea about shot put at a middle school in Anchorage with an old and shabby track, someone who later would have to overcome what doctors considered a career-ending injury.

Now here he is, working hard to make his dream a reality.