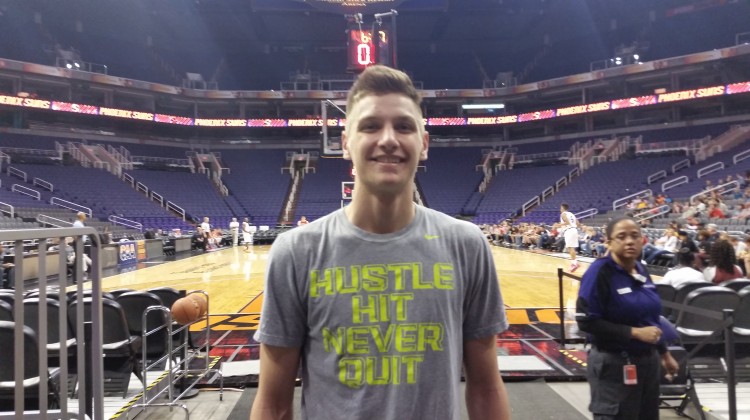 On the court, the willing passer’s choice is often to give up the ball to feed a teammate. Sometimes, like in the crucial moments of Thursday’s Canyon Athletics Association Division III semi-final game against Southwest Leadership Academy, Gardner’s choice is to put the team on his shoulders and rise up from outside the arc to bury a clutch three-pointer despite struggling with his jumper all game.

But before all that happened, Gardner chose to attend Tri-City.

“I was actually going to attend Gilbert High School because that’s where my sister and my brother went for a little bit,” Gardner told Sports360AZ.com last week.

At Gilbert, Brock would have joined a team that’s gone 17-7 and earned a bye to the second round of the AIA Division I state playoffs. There’s no question the 6-7, 200- pound team captain would have contributed to the four seed’s run.

But Gardner had other priorities.

“Just the atmosphere from a public school to a private school is huge,” he said. “And as a family, and as a person, and for myself I just wanted to attend a school that could develop my relationship with Christ and have a great atmosphere and play with great guys too, and it has all of that.”

Now, as Gardner’s high school career winds down (undefeated Tri-City plays in the CAA state finals on Tuesday), his choices have him heading across the country, to Liberty, the noted Christian university in Virginia.

“They originally offered last summer,” Gardner said, “Then they had a coaching change and the new head coach came and watched me and he continued the offer. I love talking to the coaches, they’re great guys, they’re always checking on me, so I know they really care about me.”

Gardner knows it’s special to be coming out of a school like Tri-City and carrying on his career.

“It’s good, I know there’s a lot of people, a lot of support,” Gardner said. “Family friends, church family, mentors. So just to have that support I have is great. And back to the coaches and the team, they help out a lot with that too.”

For now, Gardner, who wants to study aviation at Liberty, has his near future mapped out for him. What comes after that, of course, will be up to him. For now, he’s focused on the state championship, and aptly named opponent Student Choice.