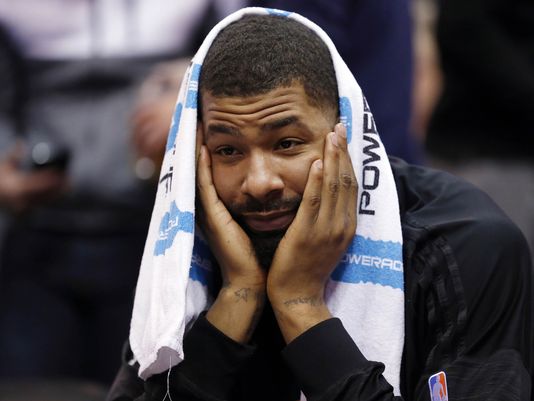 On Thursday afternoon the fractured marriage officially ended in an official divorce.

With just minutes remaining before the NBA trade deadline expired news broke the Phoenix Suns traded forward Markieff Morris to the Washington Wizards for a protected 2016 first-round pick and a pair of players. The pick excludes selections 1-9 this summer.

Last summer Morris publicly stated he would not return to the Suns after the franchise traded his twin brother Marcus to the Detroit Pistons this past off-season as they attempted to clear salary space for free-agent LaMarcus Aldridge. Markieff Morris eventually reported to training camp and said he was happy to be back but quickly fell out of favor with former head coach Jeff Hornacek and was benched large parts of the first half of the season before Hornacek was fired and replaced by interim coach Earl Watson.

The former Kansas Jayhawk star averaged over 20 points and seven rebounds under Watson as some believed general manager Ryan McDonough and the franchise were merely “showcasing” his talents to potential suitors before this week.

Phoenix’s 2011 first-round pick (#13 overall) came under fire for a number of different incidents including a felony assault charge (along with his twin brother) for an alleged fight outside a downtown Phoenix rec center. Both pleaded innocent to the charges. He was threw a towel at Hornacek during a game against the Denver Nuggets back on December 23rd and most recently got into a dispute with teammate Archie Goodwin against the Warriors on February 10th in what turned out to be his final game as a Sun.

The Suns host the Wizards on April 1st.