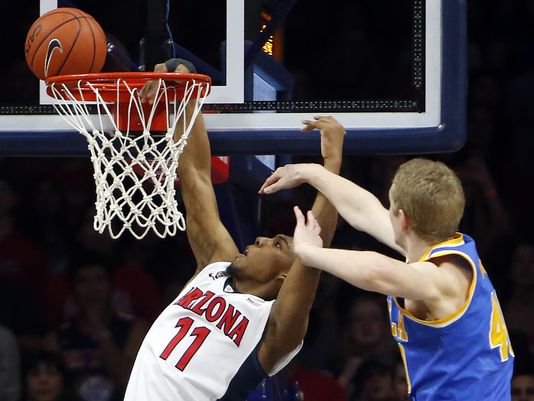 Here are five things we learned in the UofA win securing another 20-win season.

1. Flipping the Script …Whatever Arizona head coach Sean Miller said to his team at halftime certainly worked. UofA shot over 50% from the field after intermission and rode the building momentum from a spirited crowd to pull away late. “We just had to make shots tough for them,” guard Parker Jackson-Cartwright said. “We didn’t have to make any big adjustments. We just had to play hard.” The ‘Cats were far from perfect but pulled closer to conference leader Oregon who was upset by Cal Thursday night.

2. No Foul Play…Arizona not only played hard they played smart, outscoring the Bruins by 16 in the second half. UofA registered six steals but only committed 19 fouls compared to 31 for Steve Alford’s team. The ‘Cats shot 45 free throws, making 29. UCLA shot 75% from the line but were outscored 29-12 as the Wildcats rallied with the clock stopped.

3. Proving His Point…In an otherwise forgettable first half the sophomore point guard Parker-Cartwright was the lone bright spot scoring 11 points (over doubling his season average) on 3-4 shooting, including 2-3 from behind the three-point arc. His offensive efficiently helped somewhat off-set the Bruins 22-10 points in the paint edge. Parker-Cartwright finished with 16 points and four assists. He committed just two turnovers in 35 minutes.

4. Bouncing Back…Add guard Allonzo Trier to the first-half dumpster fire. The freshman from Seattle didn’t make a field goal (0-6, 0-3 on 3’s) but helped ignite a second half Cats’ comeback taking over when Arizona’s offense needed him most. He finished with a team-high 18 point and missed just one free throw in 10 attempts.

5. Double Trouble…Center Kaleb Tarczewski played an efficient 28 minutes scoring nine points and grabbing a game-high 14 rebounds (four offensive). His front-court mate Ryan Anderson added a double-double with 11 points and 13 rebounds. Both helped limit Bruin seven-foot center Thomas Welsh who scored half his season average (just six points) and fouled out. UofA out-rebounded the Bruins 42-34 as they took control of the glass and game midway through the second half.

The Wildcats host #23 USC Sunday. The Trojans were upset by ASU Friday evening in Tempe.