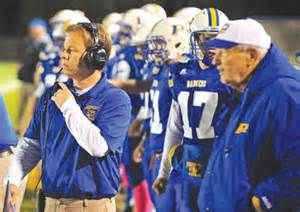 For high school football programs, it mathematically can’t get worse than 0-10.

But in a Poston Butte program that did just that last season, Cody Collett sees promise.

“It’s hard to read a lot into last year because the divisions were a little mixed up,” Collett, Poston Butte’s new head coach said in a recent interview with Sports360AZ.com. “And I think honestly, at least for one or two games, they played competitively with a lot of good teams. Played a really competitive game with Corona who was a DII playoff team, and I think a couple things go the other way it could certainly have been a different campaign for them. But I think there are some really good kids coming back, and we’re really excited about that.”

Collett comes to the program after four successful years at Prescott, where he went 27-14, replacing Paul Moro.

A former coordinator at Red Mountain and Dobson, Collett admitted it was a hard decision to return to the Valley and leave lifelong friends his family had made in Prescott. But he saw in the Poston Butte job a great opportunity.

“I think number one we have to establish the culture of our program, what we want to get going,” Collett said. “One of the huge positives of the program is Coach Moro brought some great coaches over so there’s already great coaches in place that have been working with the boys in the weight room and I’ve been able to get over there a couple times a week as well.”

As he praised existing coaches and Poston Butte’s freshman athletic academy and discussed his high hopes for the program as a whole, Collett recognized a weakness that needed addressing in order for the school to rise to prominence.

“I think the number one thing that Poston Butte’s going to have to do is keep our kids here,” Collett said. “If we can keep our kids from going to the Queen Creeks and going to the Bashas I think we have a chance to be a power, I really do. It’s something I’m excited about because I think once the kids get involved with the program, they’re going to enjoy it. But I know in the past a lot of kids, boundary-wise that could’ve ended up with Poston Butte didn’t end up there, and that’s something we need to get changed.”

It might help that Collett plans to bring a new style of play with him to the Broncos, though he realizes this will require getting used to for the players.

“We’re going to try to be very, very up-tempo,” Collett said. “And that’ll be an adjustment period because we’re going to be doing things a little quicker-paced than they might be used to.”

Collett is emphatic, however, that as important as football is, it’s not even secondary among his priorities for the program.

“The number one goal with our program is to help develop our kids as people, first and foremost,” Collett said. “Students secondly, and thirdly as players. And that doesn’t mean we’re not going to try to win a whole lot of football games, but we’re not going to sacrifice doing it in that order. We’re going to do things the right way and after four years, we fully anticipate all the young men are going to be better people as a result of being involved with this football program. I think a great football program has to be able to justify itself as part of the educational process and we certainly plan on doing that.”