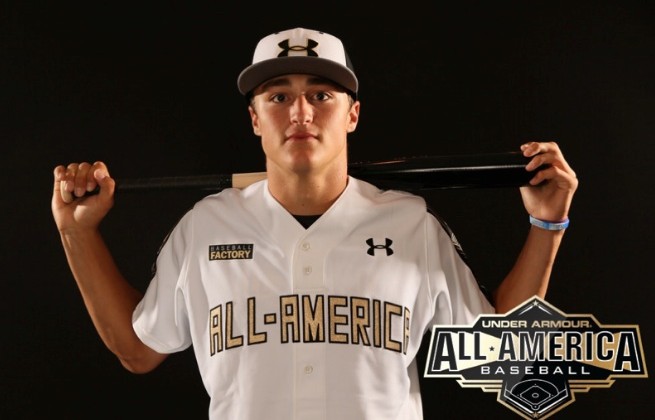 It was just before Thanksgiving, and the 6-4, 190 pound Junipero Serra High School (San Mateo, California) senior had just met with associate head coach Chris Strausser from the University of Washington, and the 17-year-old felt like his future was clear.

The Bishops love Seattle. Hunter’s brother, Braden, played baseball at Washington before getting drafted by the Seattle Mariners in the third round of the 2015 MLB draft. The Huskies were offering Hunter a spot as a preferred walk on at wide receiver, and it meant Hunter had a chance to play a game he loved in a place he felt comfortable. He quickly committed to play football at Washington.

Then his dad, Randy, got a phone call. It was Arizona State baseball coach Tracy Smith.

“He basically said, ‘You know listen, I’m really happy for Hunt, and if football’s what he wants, I fully support it, but I’m calling basically as a father to talk to a father, and I really believe that Hunter is going to change his mind at some point and I just want to tell you why,’” Randy remembers.

Coach Smith has a son Hunter’s age, and he was going through a similar dilemma about what avenue to pursue in college athletics.

“When I committed, all the other coaches kind of faded off and said ‘Ok he’s committed’,” Hunter Bishop said. “But coach Smith, his son is going through kind of the same thing right now with NAU football, so he gave my dad a call and kind of had a heart to heart with him, kind of dad to dad and not coach to parent, and my dad really liked that and said, ‘You know you should really talk to coach Smith’.”

Randy says the 45-minute conversation he had with coach Smith changed everything. Smith told Randy that he just couldn’t stop feeling like Hunter would have a change of heart.

He told Randy he’d keep a spot open for him on the baseball team. That much alone meant a lot, but then Smith went one step further.

“He asked me to send him Hunter’s film and he’d forward it to football,” Randy said. “And he texted me later and said the football guys love Hunt’s film; they’re very interested in him coming.”

Now new ASU offensive coordinator Chip Lindsey was calling Randy up, and suddenly a dream scenario was developing. If it weren’t enough that Hunter might be able to play both sports that he loved, there was also the fact that coach Smith was right. Hunter had baseball in his blood.

A trip to Tempe solidified it.

“After sitting down with coach Smith and talking about my plan and realizing that, you know, one day I maybe could be a Major League baseball player, it just helped me get my focus to where I want to be,” Hunter said. “I realized football’s not my avenue in the future, and baseball really can be if I really work on it and go to Arizona State.”

The decision was made just days after last week’s visit to the desert. Hunter was going to be a Sun Devil.

“You shake his hand, he’s got some big old paws,” his coach at Serra, Craig Gianinno said. “They’re big boys. He’s got long levers, he’s wiry, got a lot of fast twitch in him, but he’s got some pop. But he’s got good hand-eye, so for being as raw as he is, I think he’s going to miss some balls and hit them a long way. And he can really run.”

Hunter says he sees a lot of another Bay Area product in himself.

“The guy I look up to a lot is probably (former Palo Alto High School player and current Los Angeles Dodger) Joc Pederson,” Hunter said. “I wouldn’t say we’re similar in every way but he plays center field, I play center field, raw power, lots of speed. So I really look up to him.

“Another guy is Josh Donaldson of the Blue Jays,” Hunter said. “So there’s a couple guys that I really like their swing and model my game after them.”

His coach believes the most impressive aspect of Hunter’s profile is between the ears.

“Unbelievable kid and makeup, from a character standpoint,” Gianinno said. “It’s interesting, a young kid, only 17, and he’ll graduate as a 17-year-old. So he is young by numbers, but he has some maturity to him and has the ability to interact and engage with adults, coaches, teachers and have conversations that go beyond the surface of a typical 17-year-old kid.

“Right now he’s an exciting prospect and he’s learning the game and that’s only going to continue to grow as his skill set grows and he continues to get pushed,” Gianinno said. “Our goal for him in the short term is really to challenge his mind and help him develop, not only physically but truly help him develop mentally.”

For Sun Devil baseball fans, it’s exciting to get a commitment from a player with such a high ceiling, but perhaps even more exciting considering it might never have happened if not for the dedication of coach Smith.

“Tracy Smith is as much a part of this thing as possible,” Gianinno said. “I don’t know what would’ve happened if Tracy Smith didn’t reach out.”

To Randy, it meant the world.

“He was the only guy, out of all the coaches, who didn’t give up hope.” Randy said. “All the other coaches were like, ‘Ok hunt’s playing football, no problem.’ But none of the other guys were like him, who said, ‘I’m saving a spot, Hunter belongs here, and I believe in him.’

“Let’s face it,” Randy said, “you know these coaches, and some coaches could care less. All they care about is winning and it being a business, and I get that, I know it’s a business. But, to be honest I’ve never had a conversation with a coach father-to-father, so it really meant a lot to me. It seemed to me that he was out for Hunter’s best interest, as a person or as an athlete, and that stood out to me.”