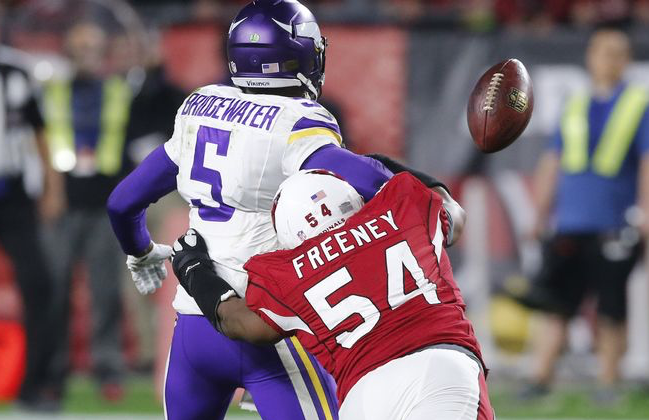 The Arizona Cardinals were back in primetime Thursday night and didn’t disappoint a feisty sellout crowd holding off the pesky Minnesota Vikings 23-20 at University of Phoenix Stadium. With the win, the Cards clinch a post-season birth and improve to 11-2. Minnesota falls to 8-5.

1. High-Dollar $ack…Dwight Freeney’s late fourth quarter sack just may have saved the game for the Cardinals. One thing we know it did was put $200,000 more in his bank account as his forced fumble of Teddy Bridgewater in Arizona territory helped secure a Cards’ playoff birth with three games remaining. His four sacks with Arizona (which guaranteed the salary bonus) equaled his 20-game total the last two years with the San Diego Chargers. “Really before it was like get your breath, get your breath,” Freeney said of the clutch play. “I was exhausted. I just found an opportunity to make a play and that is what I did.”

2. History for 3…Carson Palmer etched his name in the Cardinals’ record book eclipsing Kurt Warner for most touchdown passes in a single season. His 31st touchdown broke Warner’s mark set during the 2008 season. “When records start falling, the season speaks for itself,” head coach Bruce Arians said of his quarterback. “I think with three games left he’s going to set them even higher.” Palmer was an efficient 25-25 for 310 yards and two touchdowns. His touchdown-to-interception ratio is an impressive 31-to-9 and he now has over 4,000 yards passing this season.

3. Glue 32…’The Tyrann Mathieu Show’ continued as he was essentially a one-man wrecking crew in the Cards’ secondary. The ball-hawking safety led Arizona with 11 tackles (10 solo). He also added a pass break up and tackle-for-loss as his emergence as one’s of the games young rising stars continues.

4. Rush to Judgement…Rookie David Johnson backed up his solid first start Sunday in St. Louis against the Rams with another outstanding all-around game carrying 19 times for 92 yards. Johnson left the game in the third quarter with an apparent knee injury but returned to catch a key 14-yard pass on the Cards’ late go-ahead drive. His play somewhat overshadowed Adrian Peterson’s 23-carry, 69-yard, one touchdown effort.

5. Run, Run Rudolph…the Cardinals’ secondary played extremely well, especially against the run, but got beat at times by Minnesota tight end Kyle Rudolph who finished with six catches for 67 yards. Rudolph entered the game second on the team in receptions which isn’t surprising considering how much veteran offensive coordinator Norv Turner has always made it a point to incorporate tight ends in the passing scheme.