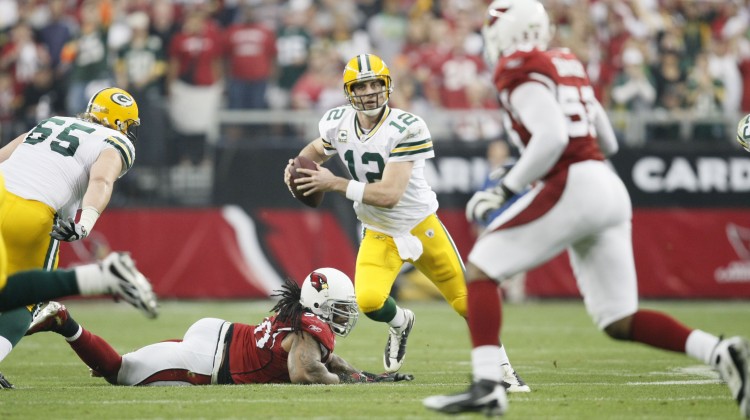 Packers quarterback Aaron Rodgers looks for room to pass after getting away from the Cardinals? Darnell Dockett during their wild-card game in 2010. Rodgers says he got over the 51-45 overtime loss in a ?couple days.? Michael Chow/ azcentral sports 01/11/2010 - 162646 - Arizona Cardinals vs Green Bay Packers NFL - After getting away from Darnell Dockett of the Cardinals, Packers quarterback Aaron Rodgers looks to pass during NFC wild card playoff football game Sunday, Jan. 10, 2010, at the University of Phoenix Stadium in Glendale, Az...(Michael Chow / The Arizona Republic )

They are playing great team ball.

That is the takeaway I have from the Cardinals blowing up a good Green Bay team on Sunday afternoon. They cut down on most of the mental errors from previous weeks and played as close to a complete game in a 38-8 blowout win over the Packers. 9 sacks of Aaron Rodgers, two of which were returned for scores, was the story of the day. Green Bay didn’t crack the 200 yard mark in total offense. The question coming into the season about James Betcher taking over as defensive coordinator for Todd Bowles, has clearly been answered.

They are 13-2, they have a first round playoff bye. Head coach Bruce Arians could decide to rest his starters in next weeks regular season finale against Seattle. He could give Carson Palmer an extra week to heal up his injured finger on the passing hand. I would doubt that he would do that. This is a coach that still had Palmer in the game with a 30-point lead, throwing the football. Carolina plays their season finale against Tampa Bay the same time next Sunday as the Cardinals play the Seahawks. Scoreboard watching will be part of the fun.