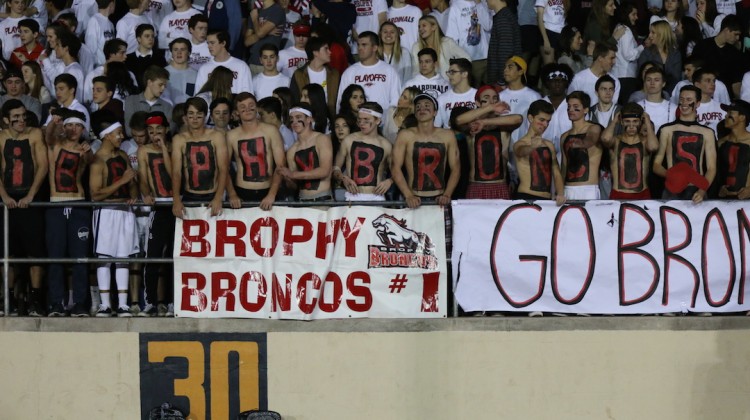 Bill Woods has been a part of the Brophy athletic scene for 26 years. During those 26 years, Woods has won multiple state championships while staying true to the school that hired him.

“I think this is where I’m supposed to be,” Woods said. “To me, I think I belong in a Catholic school.”

Woods, born and raised in Arizona, is the athletic director of Brophy College Preparatory. He started out at Brophy originally as a science instructor, but began teaching math one year later and went on to be math department chair for over 10 years.

Woods said his favorite part of being the athletic director is attending high school sporting events. In fact, he said he prefers high school athletics more than college and professional sports.

“I think I just like the way that high school kids are asked to act and the way they compete and I love being there,” Woods mentioned.

Woods believes the job of an athletic director is about communications. Saying the job is about communicating in a lot of different ways to a wide variety of people. The most important lesson he has taken away from his experiences at Brophy is that the students and the players remember everything said.

Something Woods hopes that the students take with them after their time at Brophy is the family aspect. When he coached junior varsity football, on Friday afternoons he and his players would watch their game film while eating pizza and drinking soda. He referred to this tradition as “Pizza Fridays.”

“When I see one of my former players, that’s what they talk about,” Woods recalled. “They remember that feeling of family and…I do think that’s different here.”

Doug Cox, the track and field and freshman basketball coach at Brophy, mentioned that he has learned from Woods the importance of making athletics enjoyable for the participants and agreed with Woods’s example of the family aspect at Brophy.

“I just saw how our athletes looked forward to that,” Cox stated. “Just the team building of being together and the eating pizza together in a casual environment and watching game film together.”

Cox, an Arizona State University graduate, coached alongside Woods in football at Brophy. He believes Woods did a tremendous job in balancing fun for the athletes while helping the team win and coaching the players on what they need to do to be successful.

“It was really just a great experience that first year, getting to coach football with him, and just seeing him in action…before I had much experience in coaching,” said Cox. “I learned a lot from him.”

“I’ve been working with him for over 11 years now and it’s great having him as the AD and the support he gives,” Cox stated. “He’s always been supportive, but now in his new role he gets to kind of escalate that to a new level of being there to support all the coaches.”

Being an athletic director does not allow for the same level of interaction that being a teacher would but Woods has a desire to get back into the classroom one day. Regardless of what position he is in, Woods said he is committed to Brophy.

“I feel that need to serve,” Woods said.