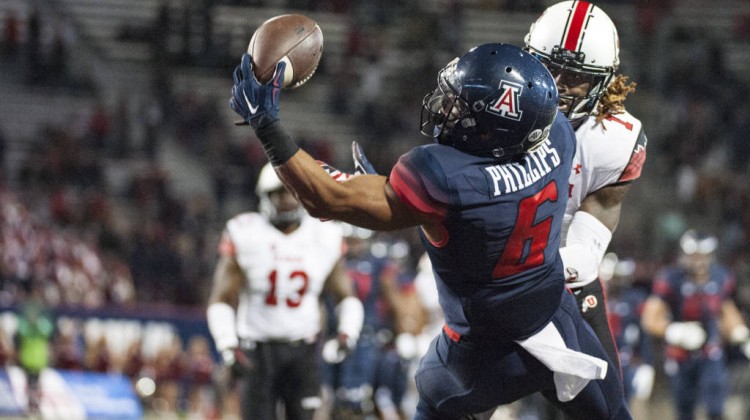 A stunning victory for the Arizona Wildcats late Saturday night in Tucson. A 2 OT 37-30 victory over No. 10 Utah was described by head coach Rich Rodriguez as “has to be one of the best since I’ve been here.”
It’s the fourth straight year that the Wildcats have played giant killer. They have beaten a Top 10 team in each of the last four seasons.
Cats backup quarterback Jerrard Randall completed a 25 yard touchdown pass to Nate Phillips on the first play of the second overtime to pull off the shocker. Randall was in the game for starting quarterback Anu Solomon, who had to leave in the fourth quarter after a helmet to helmet hit to the head by the Utes. The win makes the Wildcats bowl eligible and sets up next Saturdays Territorial Cup showdown with Arizona State in Tempe. Arizona has now beaten Utah in each of the last four meetings.
With the loss, Utah falls into a tie with USC in the Pac-12 South. Also on Saturday night Oregon beat No. 7 Stanford 38-36. With both results, it’s going to be a very difficult road for the Pac-12 conference to have a representative for the final four college playoff field.