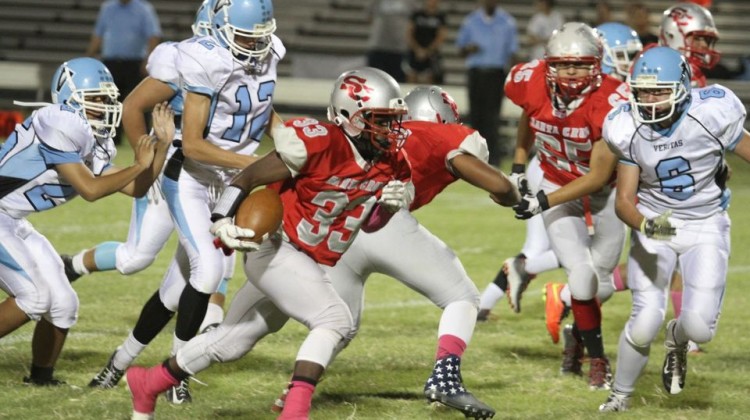 With the AIA Division V State Football Championships around the corner, Santa Cruz Valley Union High School (8-2) seems to be hitting its peak. The Dust Devils have taken on somewhat of a throwback mentality this season with their stout defense and explosive running attack.

This defense, which has shutout half of the ten teams it has faced this season, rarely deals with fatigue due to the offense’s ability to maintain drives and milk the clock. For example, their Oct. 23 game against Valley Christian (a game in which Santa Cruz won 50-0) the Dust Devils ran nearly twice as many plays as their opponents, and controlled the ball for three quarters of game time. Santa Cruz spent much of that game, like many others, rushing the ball repeatedly for chunks of yards at a time.

Hector Hermosillo, a senior fullback for Santa Cruz, said this can be attributed to how they practice.

“We do a thing called ‘Power Hour,’ where basically all we do is running plays for an hour straight, practicing fundamentals, what to do on each block in different schemes,” Hermosillo said.

Hermosillo added that by practicing their run plays against different defensive looks, they always know who to block. Junior running back Devin Neal also mentioned how Power hour “does a lot” for the offensive line, but it also appears to help the number of rushers the Dust Devils can put on the field. In that game against Valley Christian alone, Santa Cruz ran the ball with nine different players, seven of whom rushed for over 20 yards. Talk about a running-back-by-committee approach.

Because many of the Dust Devils’ defensive starters are also offensive players, the shared backfield allows the defense to remain rested when they do come into the game.

Throughout this season, Santa Cruz has molded an identity of running the ball effectively and playing lights-out defense, but to compete in the playoffs, they will have to cut down on the penalties. Against Valley Christian, Santa Cruz committed 16 penalties for 120 yards. In the playoffs, you can’t have that stat line and expect to win.