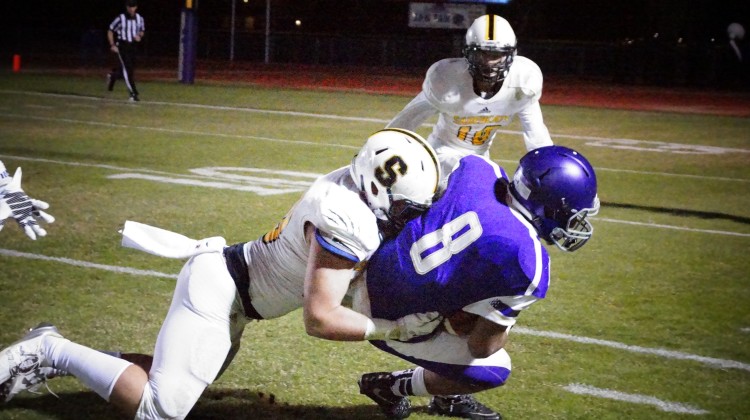 It’s hard to imagine a team that hasn’t loss in almost three months and riding a nine-game winning streak is only recently playing its best football.

But that was the feeling of Saguaro head coach Jason Mohns after the No. 7 Sabercats ran roughshod against No. 2 Queen Creek on Friday night, 54 – 0.
“We’ve been through some ups and downs this season,” Mohns said after the lopsided victory. “We had some issues with some guys playing as individuals, and there were some kids dismissed from the team, (but) I feel like the last couple of weeks – this week especially – we’re finally playing as a great team.”

Saguaro dominated from the start, scoring 21 points off of three-straight Queen Creek turnovers to start the game.

The Sabercats ended the night with seven takeaways, including two interceptions and three fumble recoveries in the first half.

Max Mudd and Byron Murphy added two more interceptions in the second half, with Murphy returning his for a touchdown early in the fourth quarter.

“Queen Creek is a good football team,” Mohns said. “They’re a better team than they showed (Friday), but when you turn the ball over and the other team capitalizes; you can handle maybe one or two of those but not three of them. We kind of broke their back early.”

Already leading 28 – 0 at halftime, the Sabercats continued to score almost at will in the second half.

Quarterback Kare Lyles, who had three touchdown passes in the win, threw two of them in the third quarter to Murphy and Jared Poplawski. The senior signal caller also had a first-half rushing score.

Murphy’s pick-six and a one-yard touchdown run by Max Massingale closed out the game’s scoring.

“I’m really proud of our team for the way we finished the game tonight,” Mohns said.

Friday’s results signaled the defending back-to-back state champions have their mojo back, which could be a scary thought for the remaining teams in the Division II playoffs.

“We were just fighting to keep our season alive,” Mohns said. “We’re having fun, the kids love each other, and we have such a positive vibe right now; everything about tonight was about trying to keep this thing going.”

In the last three halfs now, Saguaro has out scored their playoff opponents 78-0. After Friday’s win, it looks like the best is yet to come for the Sabercats.