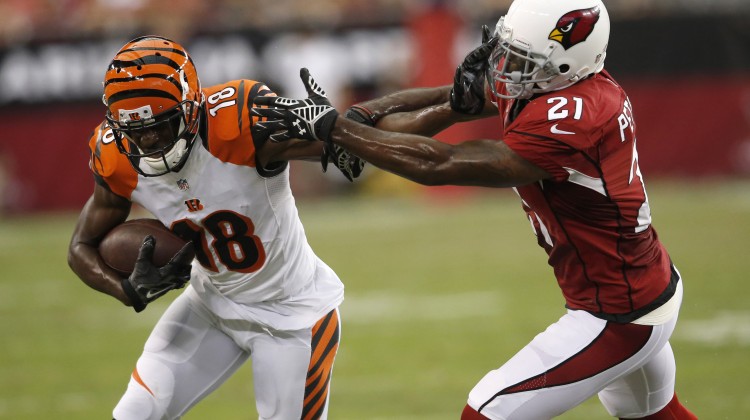 The Arizona Cardinals wrapped up their Sunday Night Football doubleheader beating the Cincinnati Bengals 34-31 on Chandler Catanzaro’s closing seconds 32-yard field goal at University of Phoenix Stadium in Glendale. Win the win the Cards improve to 8-2. The Bengals are also 8-2.

Here are five things we learned in the nail-biter.

1. Hollywood Script…After a two-interception first quarter against his former team Carson Palmer heated up showing off the arm strength and accuracy he’s displayed the past couple seasons working in Arians’ vertical passing attack. He finished 20-31 for 317 and four touchdowns following the early struggles. “I wasn’t thinking Hollywood or anything like that,” Palmer downplayed when asked about the game-winning drive. “Obviously, when you play somewhere else it adds extra to it.” What’s even more impressive was his ability to spread the wealth connecting with Darren Fells, J.J. Nelson, John Brown and David Johnson for touchdowns after the two early picks. Palmer became the first player in franchise history to throw at least three touchdown passes in six games in one season.

2. Rookie Raucous…The fruits of general manager Steve Keim’s 2015 pre-draft labor were on display against the Bengals. Wide receiver J.J. Nelson had a breakout game with four catches for 142 yards and a 64-yard touchdown. Running back David Johnson reeled in 16-yard scoring catch. Linebacker Markus Golden had three tackles, including a key sack-fumble which led to a score. Fourth-round selection defensive tackle Rodney Gunther added a sack for good measure, as well. “They should be able and ready to roll by Thanksgiving,” Arians said about his rookie class. “Your young guys have to step in now.”

3. Happy Hundredth!…Hard to believe the Cards have played 100 games in UOP, isn’t it? Arizona certainly made it a memorable one fighting back from early hole before icing the game on the final drive. “I am proud of our guys,” head coach Bruce Arians said. “Things didn’t always go our way but we managed to keep fighting and making some key plays down the stretch. The Bird Gang improved to 13-0 at home against non-division opponents under Arians. With the victory the Cards maintain their three-game lead over Seattle (5-5) in the NFC West.

4. Pressure Points…Many believe the Bengals are one of most talented, well-balanced teams in the league and early Sunday it was evident up front defensively as Cincinnati routinely pressured Palmer, forcing two interceptions and sacking him once. The Bird Gang managed just 108 total yards in the first half, only 31 on the ground. Most of the heat applied to Palmer came off a four-man rush as Cincy dropped seven in coverage. The Cards cranked up the heat themselves in the second half as Calais Campbell and others made Andy Dalton uncomfortable and inaccurate. He was 0-6 to start the third quarter before leading the Bengals on a scoring drive early in the fourth quarter. The Cards sacked Dalton four times.

5. Penalty Parade…the closely contested game against two elite teams was far from perfect. The two combined for 17 penalties for close to 150 yards. No one was more critical than Bengals’ defensive tackle Domata Peko’s unsportsmanlike conduct call for reportedly mimicking the Cardinals’ snap count moments before Catanzaro’s game-winner. “They get the phantom call there at the end,” disgusted Cincy head coach Marvin Lewis remarked. “It’s kind of ridiculous.” The Bengals were flagged a total of 10 times.for 108 yards. To the victors go the spoils, I suppose. No one in the Bird Gang is complaining.