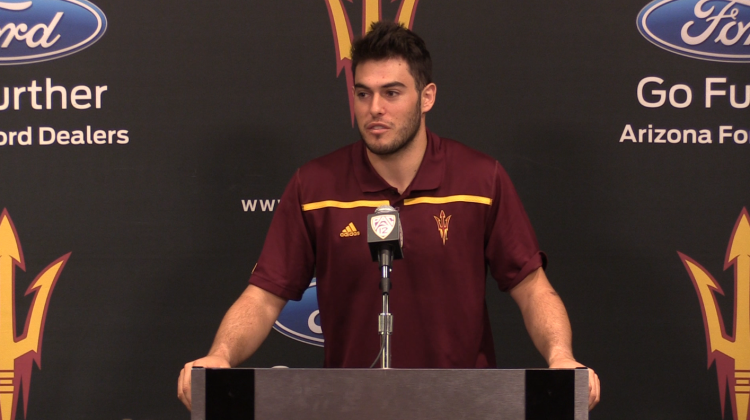 The Sun Devils are coming off a huge win over then-seventh ranked UCLA Saturday.  Quarterback and Calabasas, CA-native Mike Bercovici helped an offense that had struggled the first few weeks of the season get back on track.  The fifth-year senior looked calm, cool, and collected (unlike when he was asked if Kim Kardashian gave him a call after the game) and said many of the Sun Devils feel right at home in the Rose Bowl.

Deputy head coach Mike Norvell was back on the sideline with his offense and had some gutsy calls that helped the Sun Devils convert on third and fourth down on their way to the end zone.  The Sun Devil offense put up a season-high 38 points against the Bruins, and Coach Graham applauded his offensive coordinator.

Punter Matt Haack made life very difficult for the Bruins, consistently flipping the field on UCLA and creating long fields.  Graham was impressed with his punter, specifically when he backed up the Bruins on their own one-yard line.

But the highlight of the night was when Kalen “Thriller” (trying it on for size) Ballage moonwalked his way to a touchdown with the help of his teammate’s.  The final nail in the coffin for the Bruins was not only a statement that particular Saturday, but for the team and the season as whole.

Now, the Sun Devils look to Colorado this upcoming Saturday.  The Buffaloes are coming off a hard-fought loss to Oregon last week, and Graham isn’t taking them lightly.

ASU and Colorado square off on Saturday at 7:00 PM at Sun Devil Stadium.