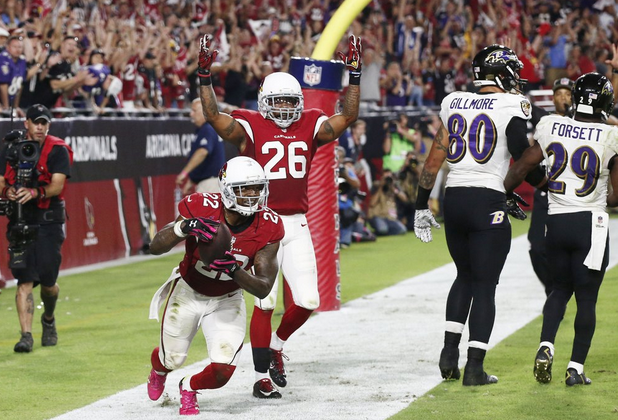 The Arizona Cardinals returned to the University of Phoenix Stadium for the first time in over three weeks beating the Baltimore Ravens 26-18 on Monday Night Football. With the win the Cardinals improve to 5-2. Baltimore falls to 1-6.

Here are five things we learned under the lights in Glendale.

1. Breaking Up the Balance…NFL road wins are hard enough and nearly impossible when offenses become one-dimensional. Monday the Cards never allowed Baltimore’s run game to heat up. The Ravens had a mere 55 yards on the ground–half their average of 111. The Bird Gang have been susceptible to the run through the first half of the season (see: Todd Gurley, to a lesser degree Le’Veon Bell) but held up well against Justin Forsett (36 yards on 12 carries) and crew.

2. Details, Details…this was a game which almost got away. A Chandler Catanzaro missed extra point, blocked punt and some ill-timed offensive clock management had Arizona’s defense backed against the wall before Tony Jefferson finally secured the Cards’ fifth win with a closing seconds interception. “We wanted to make sure there was a [expletive] good traffic jam,” head coach Bruce Arians half-heartedly joked afterwards. History has proven the NFL can be unforgiving for teams who don’t play a full 60 minutes. It’s a trap the Cards best avoid during the second half of the season.

3. Bargain Back…those contract incentives and bonus tiers for Chris Johnson don’t seem so far-fetched after all now, do they? The resume’ continues to build for the artist formerly known as “CJ2K.” He started with a 46-yard opening quarter and was over 100 by the end of the third thanks in large part to a 62-yard burst after rolling over a Ravens’ defender who thought he made the tackle. “”He’s a pro,” Arians said of the play. “He knew the whistle didn’t blow. It was a good play.” Last year Arians’ offense was usually stuck in second-and-eight, second-and-nine: Johnson’s production running on first against the Ravens usually cut that distance in half. Johnson is enjoying his re-birth of sorts in Arizona and said he isn’t thinking about contract extensions. “As long as we win at the end of the day,” he told the assembled media in front of his locker. “That’s all that matters.”

4. Badge(r) of Honor…Tyrann Mathieu continues to play at a Pro Bowl level. On the big stage he certainly didn’t disappoint against the Ravens. The third-year safety showed his versatility whether it be dropping deep in coverage, helping support the run game or blitzing off the edge when defensive coordinator James Bettcher looked to turn up the heat on Joe Flacco. He finished the game with seven tackles (three for loss) and a sack which brought a wide grin when asked. “Man it was fun,” he said of the play. “I have been begging for that all year and it was great I had the opportunity to get to that passer today.”

5. Like Fine Wine…Steve Smith has been playing in the NFL for 25 years. Ok, only 15 but what does it matter? Although the 36-year-old announced before the year this will be his final season, it appears Smith could go another five if he wanted. Going head-to-head with fellow Pro-Bowler Patrick Peterson and at times Mathieu, Smith got loose for five catches and 78 yards on nine targets. He drew plenty of attention on the Ravens’ final drive which could have potentially tied the game with a touchdown and successful two-point conversation as they replicated earlier in the fourth quarter.

The Cards hit the road again next weekend playing the Browns in Cleveland.