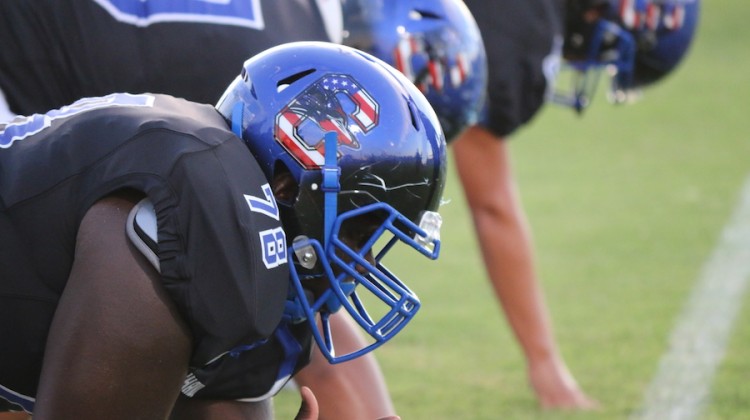 The favorite: #1 Chandler – The Chandler Wolves have not lost a game in Arizona now since the 2013 semi-finals as they run the table in this state once again for the 2015 season. This offense might be even better than it was last season that saw the Wolves win that coveted state championship. We know about Mason Moran, Chase Lucas and N’Keal Harry, but how about players like running back T.J. Green and receiver Johnny Johnson who have seemingly come out of no where. This offense looks as deep and talented as ever. Until someone other than Bishop Gorman can prove they can beat them, the Wolves are the favorite.

The sidekick (second favorite): #3 Hamilton – The Huskies had an excellent game plan against the Wolves on Friday night but just came up short to avenge their two straight losses to their friends down AZ Ave. What is most impressive about Hamilton is that it doesn’t matter if they are way up or have to battle back from behind like they did against Brophy and Chandler, they play their game and they do so well. Rashad Williams is one of the best running back’s in Arizona. He runs hard, he lowers his shoulders and pushes for extra yards and is really impressive. I also fear for anyone that has to go head-to-head with Garrett Rand this post-season. He is a man amongst boys and looks like he is on a mission.

The Dark horse: #4 Desert Ridge – Quietly once again, here is Desert Ridge coming into the playoffs with only a couple losses and not being talked about nearly enough. Well, here is me changing that. Jeremy Hathcock has a team that is gritty and as tough as any in the state. They have the formula for teams that go on deep runs in the playoffs which include great size and ability in the trenches on both sides of the ball mixed with a very solid run game. If they take care of business, they could see Chandler in the semi’s. They played the Wolves very tough at Chandler early in the season and will have confidence if that game comes to fruition.

The Bracket Buster: #7 Brophy – Many believed that the Broncos would be among the elite in division I this season and seven seed is a little lower than some would expect coming in. This bracket actually sets up pretty well for Brophy despite the lower seed. They first have to take care of business against Pinnacle, a team they lost to earlier this season, in the first round. They then are looking at matchup’s against Mountain Pointe and Hamilton if higher seeds prevail later on. Mountain Pointe is very talented and went unblemished but is young and the veteran experience of Brophy could matchup well against them. The Broncos held a big lead on Hamilton when they met a few weeks back before the Huskies made a big comeback. Bropy has a lot of work to do but if their experience shows itself, they could be a very tough out.

The favorite: #1 Skyline – The Coyotes have cemented themselves the top seed in division II by running the table and picking up right where they left off last season making a run in the division I playoffs. Amarii Keyes is one of the most explosive players in Arizona and on the other side of the ball, the Skyline defense has answered the call with every challenge that has been in front of them. Skyline proved a lot in their final two wins against Williams Field and Mesa which showed they with good reason are deserving of top seed in the tournament.

The sidekick: #7 Saguaro – Saguaro has received a seven seed for losing to two top ten teams in the division I bracket. I am not sure why they are being penalized for challenging themselves but head coach Jason Mohns wouldn’t have it any other way. The Sabercats are the most athletic team in this bracket and have all the tools to make a run at yet another state title. Add the fact that they are battle tested from the games earlier in the season and they have bulletin board material with the seed they have next to their name. There has been some injuries and turmoil around this team off the field this season but on the field, this is a great senior class that hasn’t seen their program lose to a team in their own division since they were freshman.

The Dark horse: #4 Ironwood Ridge – The Knighthawks have to take each game one at a time. They got caught not doing that last season as they were on the wrong side of the biggest upset in the playoffs last season. The team that upset them is the one that they face in round one, Sunnyside. Hard to believe they will overlook their opponent again and when they don’t, they have a road which I believe could set themselves up for sneaking into the championship game.

The Bracket Buster(s): #9 O’Connor/#8 Mesa – The winner of the O’Connor and Mesa game will most likely see Skyline in round two. I am not saying that Skyline is on upset alert but their round two opponent will be as tough as any one seed will face in all five division playoff brackets. Mesa has proved they are for real beating Red Mountain and having Williams Field on the ropes. O’Connor has one of the most underrated quarterbacks around in Bailin Markridge and a very physical defense. If one of these two can eliminate Skyline, this whole side of the bracket could be up for grabs.

The favorite: #1 Paradise Valley – Not one team has been able to stop Daniel Bridge-Gadd, Jacob Brown and company this season and it will take in incredible effort to do so. This is as high powered an offensive attack that we have seen this season at any level. But there is more to this team than offense. Linebackers Grayson Fratellah and Max Seifer (only a sophomore) are everywhere and a big part of the Trojan success.

The sidekick: #2 Sunrise Mountain – What a statement the Mustangs made in week ten in blowing out their rival, the Cactus Cobras who knocked them out of the state tournament last season. It was nice to see Chase Cord finally get that division I offer because this young man is a special player and has some spectacular weapons around him. They have outscored their opponents a combined 596-124 this season. Yes, you read that correct. Of course, it is Cactus once again standing in front of them in round one. A team they beat for the first time in school history but also got eliminated by last season. If they handle that game like they did in week ten, the Mustangs and Trojans are on a collision course and wow, would that game ever be entertaining!

The Dark horse: #3 Desert Edge – The Scorpions run game is as good as any in the state with junior stud Roshaun Johnson, sophomore Rocky Perez and duel-threat quarterback Tehran Thomas. Teams that get it done in the trenches and on the ground are more often than not, the ones that find themselves in the championship game. Desert Edge has I believe the best offensive line in division III  as they average around 300 pounds on their line. PV and Sunrise have stolen the spotlight in this division but the Scorpions cannot be forgotten about.

The Bracket Buster: #10 Mingus – Bob Young’s Marauders are 9-1 and have allowed a combined 14 points in the last four weeks. They run the good old wing T to perfection and have some smart, well-coached football players on their team. I really like their round one opponent, Verrado so it is very difficult to predict that Mingus will win a game or two. But watching this team in person, they have the discipline and smarts to catch teams off guard.

The favorite: #1 Yuma Catholic – Who cares that they lost two division I athletes from their team a season ago! Yuma Catholic has retooled this season and has proved that they are a team and talented football program that aren’t just here for one or two years. Stetson Stallworth took over the reigns at quarterback this season and has done a masterful job. They got a tough draw having to possibly meet Northwest Christian in the second round and have great teams like Snowflake and Estrella Foothills on their side of the bracket, but they have proven that they can take care of business against whomever they face.

The sidekick: #2 Show Low – Show Low looking to restore the their storied history with their first run at a state championship appearance in a few years. They have some very talented athletes like Quentin Clark and Willie Wyatt who are as explosive as you will see in this entire bracket. The bottom half of this bracket I believe is a little weaker than the top so the Cougars could be destined to play on the final week of the season.

The Dark horse: #4 Estrella Foothills – There are only a handful of players who have division I offers at this level of play and one of those is Estrella Foothill running back Joe Logan. This young man is dynamic and gets it done not only on the ground, but through the air if needed as well. Their only loss is to the number one seeded Shamrocks and they played them tough by only losing by six points. They will have to go through Yuma Catholic once again to get to the promised land but they cannot over look possibly round two opponent in Snowflake.

The Bracket Buster: #6 River Valley – Hey remember us?? River Valley won a state title last season and all they have done is lose one game this season which was the smallest margin of victory all season for Yuma Catholic. Yet, they are a six seed. This is the team that could get in the way of Show Low’s run at a title appearance and I would not be surprised at all to see this sixth seed hoist the state championship trophy.

I believe that this is a two team race for the state title. Not to take anything away from teams like American Leadership Academy, Round Valley and Scottsdale Christian who had fantastic seasons, but these two top seeds have been out in front all season and it is hard to see any getting in their way. Benson is the number one seed and according to the AIA/MaxPreps power rankings, are the class of division V. But Joy Christian has a roster that could compete with the best of division IV and maybe even division III with QB Matt Mitchell and receivers Dujuan Lawrence and Isaiah Goodspeed. If those two do in fact run the table and meet in the title game, it could be quite an entertaining football game.