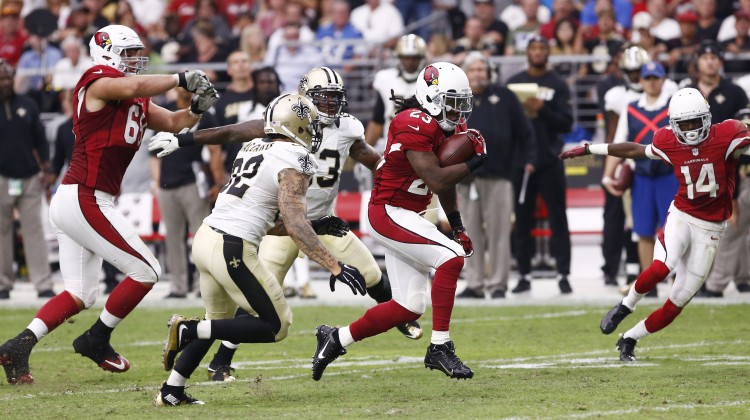 Arizona Cardinals Chris Johnson runs through the New Orleans Saints defense during the second half on Sep. 13, 2015 in Glendale, AZ.

It would be hard to argue any one area of the Arizona Cardinals is more improved in 2015 than their rushing attack.

The three-headed monster of Chris and David Johnson, along with Andre Ellington elevated Bruce Arians’ offense to another level through the first five games.

Then they ran into a curtain.

“The two things I noticed coming out of that game,” SI.com senior NFL writer Peter King told Sports360AZ.com’s Brad Cesmat during his weekly visit Tuesday morning referencing the Cards’ 25-13 loss Sunday to the Steelers. “Against Detroit they had an excellent day running the ball. Against Pittsburgh they had a lousy day running the ball.”

Arizona rolled up 469 yards against Pittsburgh but only 55 of those came on the ground.

Carson Palmer continues to play at a high level but King feels offensive balance is a must for sustained success this year and beyond.

“Carson Palmer is not at the stage of his career, hardly any quarterback would be, where if it’s always second-and-nine, second-and-eight you’re not going to be in good shape,” he explained. “That would be the focus going into Baltimore and against Cleveland.”

The good news for the Bird Gang is they continue to hold a two-game lead in the underachieving NFC West and are entering a “break” in their schedule hosting the 1-5 Ravens on Monday night, then traveling to play the 2-4 Browns before entering their bye week.